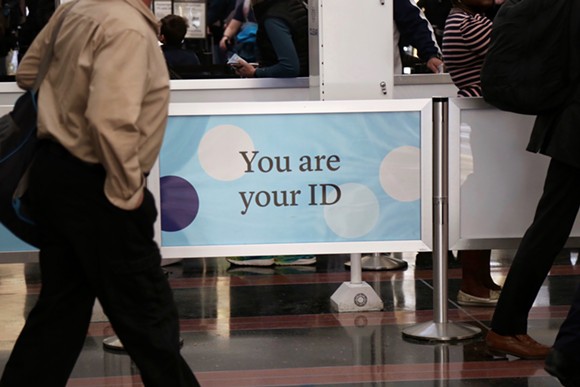 All international gates at the main airports in Orlando and Tampa will soon use small facial recognition stations to verify the identities of all incoming and outgoing travelers, including U.S. citizens.

Officials say the technology will speed up passenger processing, but its primary purpose is to nab imposters using fake passports or capture people who aren't already catalogued in the facial recognition database, like undocumented immigrants.

The first few stations, called Automated Passport Control Kiosks, went up in mid-2018. Orlando International Airport (MCO) is close to outfitting all of its international gates with the iPad-size pods, tallying 30 altogether for around $4 million as part of a sweeping effort by U.S. Customs and Border Protection to modernize its identification technology.

Using the kiosk should take passengers no more than 90 seconds, according to Sita, the Swiss company that provides the hardware. A passenger walks up to what looks like an iPad on a stand, faces the camera for a photo, then continues through the airside.

The kiosk uses CBP's face-matching algorithms to identify the passenger's face from a database of millions of government-issued image sources like passports, visas and drivers license's. That match then joins with boarding control information shared by the airline.

Boarding software from 18 airlines at MCO is integrated with CBP's facial recognition algorithm on international gates, and a handful of them are still in testing.

"Airlines that use those gates have to be modified" to work with CBP's software, MCO's chief information officer John Newsome said in a phone call. "As a matter of fact, I think we just completed testing Iceland Air last night."

"We haven't completed the install for all the gates, but it's already being used," MCO spokeswoman Carolyn Fennell said.

"We're moving in the direction of a one-stop process," TPA's Senior IT Manager Doug Wycoff said in a news release. "It's a big enhancement both for our passengers and the airport."

Facial recognition is a type of biometric identifier that companies and agencies say is more convenient to confirm passengers' identity with because it doesn't require physical contact like fingerprint scanners, which airlines complain slows down boarding lines and costs too much money.

But the cost of convenience could be the technology's accuracy. A 2017 report from the Georgetown Center on Privacy and Technology says the
U.S. Department of Homeland Security's airport face recognition systems erroneously reject as many as one in 25 travelers who had valid passports, which could prompt authorities to deny boarding misidentified passengers or cause unwanted delays and encounters.

There are currently no laws or regulations in Florida that govern law enforcement's use of facial recognition technology, and some software, like Amazon's Rekognition, has a greater tendency to misidentify women of color over white men.

The Customs and Border Protection agency uses the technology to catch international travelers who are overstaying their visas, or undocumented immigrants whose photos don't show up in the image database.

According to a 2018 report in Frontline, a government periodical disseminated by CBP, a facial recognition station at the Atlanta International Airport flagged a 28-year-old Mexican woman on her way to catch a flight to Mexico City because her face didn't match any of the photos stored in the database.

CBP agents pulled her aside, according to the report, and the woman, who didn't have a visa or green card to show she was a lawful resident, admitted to entering the country illegally four years prior. The CBP agents took her fingerprints and, with her facial photo now captured by the kiosk, her biometric information was logged in a "lookout list" of immigrants that can remain stored for up to 75 years.

"The device automatically created a biometric exit record confirming that the woman left the country," the report said, adding that "passengers like the young woman have been found daily" using the facial recognition stations in Atlanta.

In a massive national security overhaul following the 9/11 attacks, Congress passed legislation in 2002 that required the Department of Homeland Safety (which was created in response to 9/11) to screen incoming international travelers with biometric data using fingerprint scanners.

DHS beefed up its biometric toolbox in 2004 and, along with the common biographic information authorities collect, began collecting the biometric data from all travelers leaving and exiting the country, including U.S. citizens.

Since then Customs and Border Protection, serving under DHS, has greatly expanded its biometric collections in separate pilot programs with private airlines that tested facial recognition stations and iris scanners at various U.S. airports.