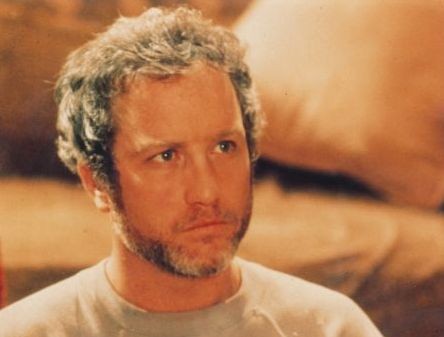 Something strange happened to legendary actor Richard Dreyfuss when, at the age of 30, he became the youngest person to ever win the Oscar for best actor. He experienced unease.

"It took me about 10 years to understand why I felt so uncomfortable at the end of the evening when I got the Oscar [for The Goodbye Girl]," Dreyfuss told me when I spoke with him by phone this week. "I didn't know why, because I really did know I was going to win. I was not surprised at the win, and I was thrilled and happy. But at the end of the evening, I was not at ease. And it took me years and years to realize the oldest cliché, which is, you know, sometimes things happen too soon."

Despite those mixed emotions, Dreyfuss says he couldn't be prouder of his performance in The Goodbye Girl, from 1977. So it's no surprise that's the film he has chosen for the Florida Film Festival.

"If there was an appropriate film that showed me at my best, that's it," Dreyfuss says of his depiction of a struggling stage actor thrown into an unconventional living arrangement with a single mom and her precocious daughter. "And it actually didn’t occur to me until within the last year or two that I had never really done a part since then like that one, which was an all-out, ballsy comedy. It's not definable as a romantic comedy. It's just a funny performance. And, yes, it is romantic. But I never had an experience like it before or since. And I used to say that I could play Elliot Garfield until I retired with a Swiss watch 50 years later because … Neil Simon somehow heard in me that character. And … from the first moment I read that script, it was a miracle."

So what's the method in Dreyfuss' miracle?

"I've never been able to say anything about my process or how I come to a role," he admits. "I do know that I didn't have to be a theatre actor to play that role. I knew that I had to be me, and me squared. … I didn't have to, when Goodbye Girl came up, have to draw upon a specific thing. It was my whole life. It was my romantic life, my professional perspective. It was the willingness to just jump in and be."

But cinema succeeds not just through individual talent but also collaboration, and Dreyfuss says The Goodbye Girl had plenty of the latter.

"It was written by Neil, and it was played by Marsha [Mason] and Quinn [Cummings], and directed by Herb Ross, [to] all of whom you just add water, and what comes out is a graceful, creative miracle."

But contrary to scripture, real miracles don't happen overnight, and Dreyfuss’ 1977 thaumaturgy was fueled by more than a decade of hard work. Still, his success was perhaps less about time and more about a change in medium.

Of course, it helps that Dreyfuss' early film resume reads like a dream, from an uncredited role in The Graduate, to a breakout ensemble part in American Graffiti, to a charismatic supporting turn in Jaws, to the lead in arguably his best film, Close Encounters of the Third Kind. But setting aside the quality of the movies, what exactly allowed Dreyfuss to find his footing?

"I think it had to do with maturity," he says. "And it had to do with a little bonding ceremony that I had with a camera once. When I was 16, 17 years old, I was doing some TV show. … I was staring at the camera while everyone else was doing something else. And I went up to the camera, and I leaned into the lens, and I said very quietly, 'I want you to like me. And I like you. And we're going to be together for a very long, long time.' And then knowing that one never touches the lens of a camera, I just kissed the air in front of that lens and went back. And I was never nervous again."

The Goodbye Girl will screen Friday at 7 p.m. at Maitland's Enzian Theater, as well as a Q&A session with Dreyfuss to follow. The event is already sold out, but standby tickets, for $60, might be available that evening. See FloridaFilmFestival.com for more information.

To listen to the complete interview, in which Dreyfuss also discusses his later roles, his passion for civics education and his recent literary project, visit MeierMovies.com.