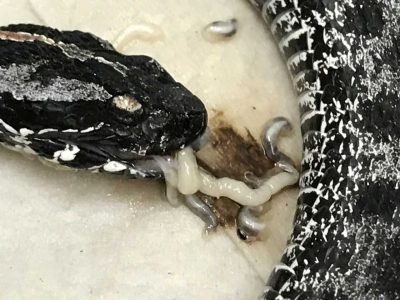 State wildlife officials already knew that the pythons, responsible for decimating the Everglades' animal populations by eating pretty much everything, were spreading the deadly pentastome parasites to native snake species in South Florida. But researchers at Stetson University in DeLand were alarmed last August after they found a venomous pygmy rattlesnake with the parasitic worms crawling out of its mouth, according to a news release.

Stetson faculty and student dissected three dead pygmy snakes found in the Lake Woodruff National Wildlife Refuge in DeLeon Springs. They found the parasites living in the snakes' lungs and trachea, which is where they usually reside after reptiles eat them along with contaminated prey, the release says.


These parasites had never been found in pygmy snakes before, but now, Stetson researchers were finding them more than 100 miles away from their python origins in South Florida.

"Our research shows that the parasites are moving north rapidly along the peninsula and appear to have some major health effects on pygmy rattlesnakes," said Terence Farrell, a Stetson biology professor who is the study's senior research author, in a statement.

The study, which was published in the journal Herpetological Review, suggests the bloodsucking worms are the likely culprit behind the snake deaths. Researchers also observed that the parasites found in the pygmy rattlesnakes were much larger than the worms found in the Burmese pythons, which could be because the pythons have already developed natural defenses against the parasite.

"It's a nasty situation because the pygmy rattlesnakes haven't evolved or developed defenses against the parasite," Farrell says. "This parasite isn't just a Florida problem. We have no idea how much of the U.S. this parasite will spread and move into, which may cause it to become a nationwide problem in a few years."