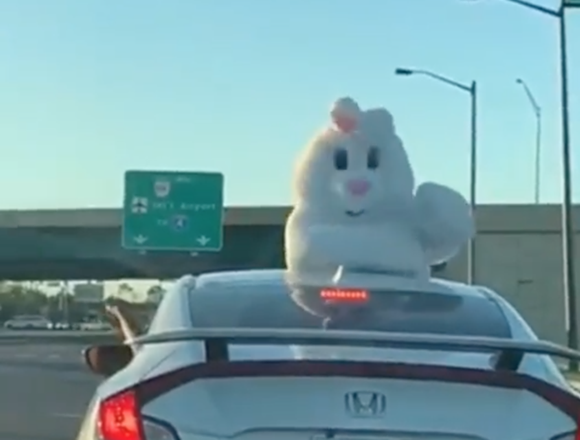 Orlando's two-fisted, crime-fighting Easter Bunny now has an Instagram, and it's pretty fire.

The fluffy vigilante went viral Sunday night after running into an ongoing brawl and beating up a man on Orange Avenue.


The man behind the costume, Antoine McDonald, 20, told Orlando Weekly Monday that he moved to Orlando about a month ago. He's had the bunny costume for a while, but he decided to put it back on for Easter this Sunday and ride around his neighborhood in Lake Nona with friends. After taking turns wearing the rabbit suit at a McDonald's and a Walmart, they decided to go to downtown. There, they saw a woman and a man punching each other outside the SAK Comedy Lab.

"I was with my crew walking down the street in the suit, and I saw the fight break out," McDonald says. "The dude had spit in her face. I ran over there to break up the fight, but then the dude got on top of her, and the fight got a little bit worse, so I had to try harder."

HOPPIN’ MAD: The Easter Bunny landed a few punches before an Orlando police officer stepped in and broke up this brawl: https://t.co/tZ1PJoQWlr pic.twitter.com/D5EZihnifZ


Viral video from an Orlando promoter who goes by Workkk caught the moment when the bunny jumped into the fight and started swinging as onlookers yelled, "Beat his ass! Beat his ass!"

The fight was quickly broken up by a bystander and a bike cop from Orlando Police. The video shows McDonald doing some shadowboxing and chest bumps while waiting for what he thought was an inevitable arrest.

"Honestly, I thought I was being arrested," he says. "After the fight, I didn't want to leave, so I was just waiting for the cop to tell me, 'Come here.' [The man and the woman] were still trying to fight, so I thought I would have to hit him again if he tried to hit her."

No one was charged in the Easter Bunny tussle after the officer broke up the scene.

"I told the police what had happened," McDonald says. "He said, 'Don't let me catch you fighting again in this suit or I'll arrest you and the damn bunny.'"

The bunny suit did take some damage in the rumble, which he'll have to repair, McDonald says, but at the moment he's a bit busy with media interviews. Still, he'd like to reach out to the woman with dreads who was in the fight. The disrespect toward women, especially African American women, should not be tolerated, he says.

"I've been trying to reach out to her to say, 'I'm sorry this happened to you,' but I haven't been able to contact her," McDonald says.

In the meantime, McDonald has uploaded more videos of his "Bad Bunny" adventures in Orlando, which included grinding, napkin rain and some essential "Old Town Road."

When the Easter Bunny Parties, on SUNDAY FUNDAY watch out!! #ugph #downtownorlando #easter