SeaWorld Orlando's Sesame Street area hasn't even been open two months, but they might already be looking at an expansion of the area.

When news first began leaking out that SeaWorld was looking to replace their dated Shamu's Happy Harbor kids area with a Sesame Street-themed area, details regarding the project were sparse but one feature all the leaks included was a dark ride. As the plans for the land evolved, the timeline for the opening was pushed up by more than two years, and the rumored dark ride was replaced with expanded meet-and-greet areas.

According to the latest rumors, as covered by theme park news site Screamscape, the plans for the SeaWorld Orlando Sesame Street dark ride have now evolved – now it seems it will replace part of the Wild Arctic building that sits next door to the new land.

Wild Arctic has been on the chopping block for some time; the San Diego version is closing in the coming months. Both in San Diego and Orlando, the dated motion theater attraction is well beyond its expected lifespan. 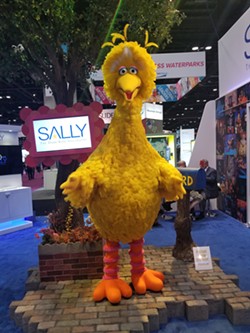 According to Screamscape and other sources, SeaWorld has yet to decide what the Sesame Street dark ride will entail. Multiple concepts are proposed. Ultimately it may be possible for more than one dark ride to eventually be realized.

Previous rumors pointed to Jacksonville-based ride manufacturer Sally Corp as the developer for the attraction, or Legacy Entertainment, who at the time was still known as The Goddard Group. Sally Corp did develop a Sesame Street dark ride this year, at a park in Spain. That ride has received positive reviews, as has another Sesame Street dark ride that opened at Universal Studios Singapore in 2013. The Singapore ride was designed by Universal Creative and Intamin, meaning none of it would likely be replicated by SeaWorld. Sally Corp showed off an impressive Big Bird animatronic used in their Spain attraction at last year's IAAPA Expo, which helped fuel the speculation that SeaWorld was looking at a dark ride that might involve similar animatronics.

Like much of the Sesame Street at SeaWorld Orlando project, the rumored upcoming dark ride will likely be repeated in other markets, including at Sesame Place in Pennsylvania and in the previously announced new Sesame Place that will open sometime in the next few years.

A new roller coaster should break ground in the coming months at SeaWorld Orlando. The announcement for that 2020 project will likely correspond with the closure of Wild Arctic. The Sesame Street dark ride and other Wild Arctic area improvements are thought to be coming in 2021 at the earliest, making the early 2020s possibly the indoor ride era for the SeaWorld company thanks to other yet to be announced projects also in the works for the company. Like the Sesame Street expansion, many of those plans are still far from being announced.