Indoor vaping in the workplace is now banned in Florida 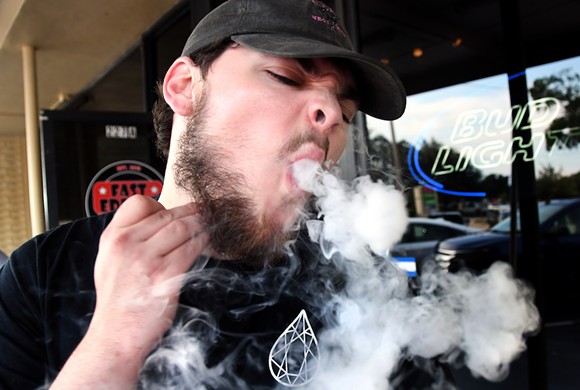 Floridians will have to keep their e-cigarettes on the shelf while in most enclosed workplaces starting this summer, under one of 10 new laws signed by Gov. Ron DeSantis.

The amendment drew support from more than 68.9 percent of voters in November.

The law, which goes into effect with the start of the next fiscal year on July 1, mirrors a similar ban in Florida on smoking tobacco in enclosed indoor workplaces.

Individuals that violate the ban face a maximum civil penalty of $25, 50 hours of community service or the need to successfully complete a school-approved anti-tobacco “alternative to suspension” program.

Vaping proponents argue that the product helps people get off cigarettes.

“I personally have witnessed hundreds of people, in hundreds of stores in the state, transition from smoking to vaping and then to not vaping,” Joshua Unger, owner of Von Vape in Sarasota, told members of the Senate Innovation, Industry and Technology Committee on Feb. 5.

As with the tobacco ban, the new law allows vaping at private residences that are not used for commercial purposes and places such as stand-alone bars, designated rooms in hotels, retail vape shops, and facilities owned or rented by membership association, smoking cessation programs, or for medical or scientific research.

The bill, sponsored by Trilby Republican Wilton Simpson and Lithia Republican Rep. Mike Beltran, was among 10 DeSantis signed into law on Friday.

Starting Oct. 1, it becomes a second-degree felony, up from a third-degree felony, for people who kill or cause great bodily harm to police, fire or search-and-rescue dogs or police horses.

The law (SB 96) boosts the amount of potential prison time from five years to 15 years.

Backers of the bill pushed for the change in part as a reaction to the death of Fang, a 3-year-old member of the Jacksonville Sheriff’s Office canine unit shot last September by a teenager fleeing after carjacking two women at a gas station, and the Christmas Eve on-duty death of a Palm Beach County Sheriff’s Office police dog named Cigo.

Sen. Aaron Bean, a Fernandina Beach Republican who sponsored the bill, told members of the Judiciary Committee on March 12 that Fang was “executed.”

“We need to respect the bond of an animal and its handler and respect the jobs that these animals do,” he said.