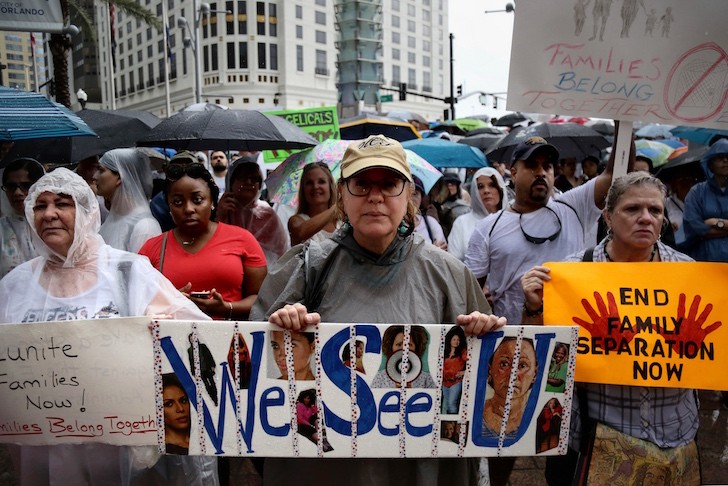 As activists in more than 600 cities nationwide last year organized demonstrations against the Trump administration's child separation policy, the U.S. Department of Homeland Security was reportedly keeping a close watch on these protests, including some in Central Florida.

Via emails obtained under the Freedom of Information Act, The Intercept reports that LookingGlass Cyber Solutions, a Virginia-based private contractor working with DHS, monitored several locations in Central Florida, including demonstrations in The Villages, Tampa, Lakeland and DeLand.

The documents notably list a protest that took place at 2 p.m. on June 30 in front of Orlando City Hall. An Orlando Weekly report from that day noted how one protester was arrested after she spat at a provocative counter protesting wielding a Trump campaign sign.

A high school in Sebring was among the protests that LookingGlass specifically advised DHS to monitor.


Tracking Facebook accounts affiliated with the protests and disseminating the intelligence to law enforcement fusion centers nationwide, the operation drilled down on physical locations where demonstrations were planned: a high school in Sebring, Florida; a church in Carbondale, Illinois; the U.S. Embassy in Mexico City; a Denny’s in Carlsbad, California; and “the old Kmart parking lot” in Stevens Point, Wisconsin. All were logged by street address and the time of the planned demonstrations.

A “Threat Analyst” in Reston, Virginia, sent the finished intelligence to a “LookingGlass Shared Services” address on June 28, two days before the protests were set to begin.
"LookingGlass has compiled a spreadsheet for State Fusion Centers detailing over 600 planned 'Family Separation Day Protests' across the U.S. on June 30," an email to DHS reads. "These originated from Cyber Threat Center (CTC) and are broken out by City and State; they provide physical location and the Facebook event ID."


In a statement provided to the Intercept, LookingGlass Chief Marketing Officer Joy Nemitz said, "As a matter of company policy and confidentiality, we do not comment on matters pertaining to clients or work performed and refer all queries to the company in question."

A DHS official said the list provided by the company was "unsolicited."