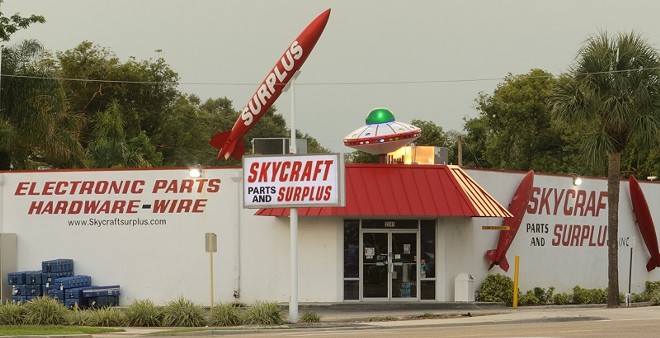 , the iconic store that has long livened up Winter Park's skyline with rockets and a flying saucer, is selling its building on Fairbanks Avenue and moving to a bigger location nearby.

Allen Fiedler, president of Skycraft, says it could take a couple of years to sell the spot at 2245 W. Fairbanks Ave. and then move the store's inventory of electronic parts, electrical supplies, hardware, wires and specialty items to their existing warehouse. The 6,198-square-foot building was listed for sale earlier this month starting at $5.5 million by the Cushman & Wakefield real estate company.

The new store would still be in Winter Park – less than a mile away at 700 Harold Ave., just behind the 4 Rivers Smokehouse. Skycraft would have about 17,000 square feet to work with in their future location.

"We're hoping to do bigger and better things," Fiedler says. "It's a much larger facility. Skycraft was only 6,000 square feet, so this will allow us to sell a lot of things that people don't usually see because they're in the warehouse. Now we can offer it to them on sight. It'll probably look a lot more interesting, too."

One part of Skycraft might not be making the move, though. The flying saucer was built by Fiedler's father, Bob Fiedler, several years after he and his wife, Dorothy, opened the store in 1974. It would not be allowed under the city's current ordinances at the new store, Fiedler says.

"I'm not sure my flying saucer is going to make the move," he says. "It's grandfathered in. You could never do that again today. It's very unfortunate. It's probably going to go to the sign place in Cincinnati. Everything else is going to move, though – we'll still have the same employees, just hopefully a better and improved look."

Aside from the current store's size limitations, Fiedler says he was also motivated to sell the Skycraft building because construction on the I-4 Ultimate Project was hurting business, especially after the Fairbanks Avenue ramp closed. Fiedler has also heard other business owners along Fairbanks complain of a similar foot traffic slowdown.

The move won't happen until the building is sold, though, so Skycraft will stay in its current spot for at least some time.

"It'll be so nice to be under one roof and have everything in one building," Fiedler says. "It saves us a lot of problems, especially with transportation issues on big items. And again, we're moving, not closing."