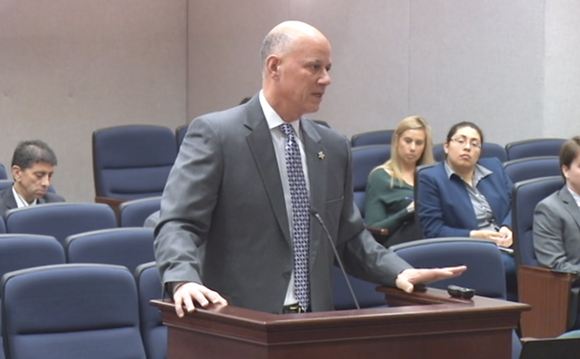 The Pinellas County Sheriff's Office says it didn't mean to inquire about "real-time facial searching capabilities from live surveillance cameras" in a document asking companies for insight on how to build a new facial recognition system.

Real-time facial recognition, a machine-learning software that plugs into surveillance cameras to automatically identify anyone walking or existing in a public place, is being tested in Orlando under a 15-month pilot program with Amazon, although officials say it's not being used operationally. After the Orlando Police Department, PCSO would have become the second agency in Florida openly considering real-time face scanning surveillance.

PCSO posted a formal request for information to the private sector in February seeking ideas on how to build a "Facial Recognition System," and included "real-time facial searching capabilities from live surveillance cameras" as a condition among the 15 minimum requirements the request asked of respondents — signaling a reversal for Pinellas Sheriff Bob Gualtieri, who has said live face scanning is too controversial and creepy.

But, following an Orlando Weekly story on the request, a spokesman for the agency said on Monday that the real-time face scanning part was "added inadvertently" and "will be removed," even though companies had already submitted their responses before the deadline over a week ago.

"That information was put in the RFI inadvertently," PCSO spokesman Spencer Gross said. "The sheriff is still very much opposed to utilizing real-time facial recognition."

But the agency's fumble still raises questions over Gualtieri's motives with the technology, and the details discussed in the request seem to extend beyond what could be brushed off as a clerical mistake.

During the request period, the agency responded to a question from one company asking what kind of video streams would be needed for live face-scanning surveillance, according to a Q&A document.

"The minimum resolution should be 1920x1080 with 30 frames per second for each video stream," the agency said.

For nearly a decade, FR-Net has enabled Florida law enforcement officers to identify unknown suspects by running their photos against a database of over 25 million faces. More than 233 agencies in Florida use it, including OPD and the Orange County Sheriff's Office.

Related In Florida, facial recognition is advancing faster than lawmakers can regulate it

In Florida, facial recognition is advancing faster than lawmakers can regulate it
By Joey Roulette
Blogs

An image-for-image search tailored for police, the facial recognition software is typically used as an alternative to fingerprints – it's still a biometric but doesn't require physical contact with the unknown person. Deputies can pull screengrabs of key suspects spotted in surveillance videos after a crime has been committed and upload them into the system to search for matches.

But real-time face scanning is different, identifying everyone in view of a live surveillance camera to scrub for possible criminals and alerting law enforcement of those individuals automatically.

Civil rights advocates have said real-time facial recognition violates privacy and can be abused by police to target people of color, immigrants or protestors – especially because Florida has no laws or regulations over how it's used. And researchers have said the technology's algorithms have a dangerous range of inaccuracies, more accurately identifying light-skinned men than dark-skinned women.