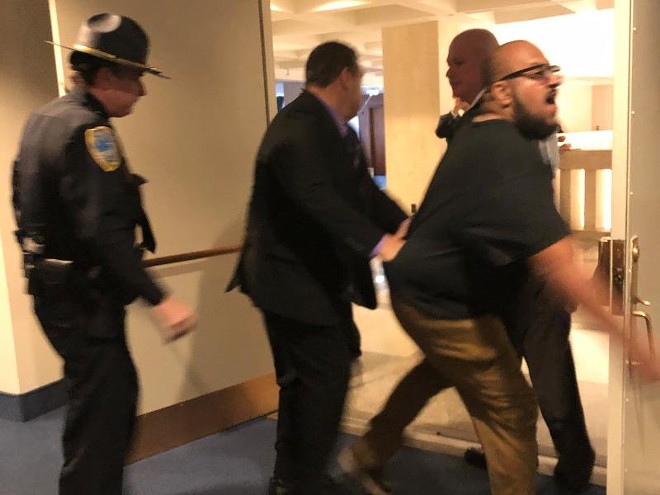 For the second time this legislative session, the House on Wednesday sent a strict “sanctuary city” bill to the Senate, where Senate President Bill Galvano has already said he plans to make changes and bounce the issue back to the House.

“We are the Senate, and we’ve made our own adjustments and we will make adjustments again,” Galvano told reporters on Wednesday.

With pressure coming from Gov. Ron DeSantis, who promised supporters he would ban so-called sanctuary cities, Republican leaders in both chambers are scrambling to pass a plan before the session ends this week.

The immigration issue has spurred one of the biggest fights of the 60-day session, and tensions have escalated as the House and Senate try to agree on a bill. Before the House vote on Wednesday, protesters in the House gallery began shouting and unfurled a large white banner printed with the slogan “Strong heart fight back.”

“This is the most hateful legislation ever,” Carlos Naranjo shouted at lawmakers before the Capitol police and members of the House sergeant’s office dragged him out of the gallery and put him in handcuffs.

The commotion prompted police to close the doors to the public gallery and sent dozens of activists down to the governor’s office to protest.

It remains unclear whether DeSantis would prefer the House or Senate version of the bill.

Proposed sanctions remain the key difference between the chambers. The House wants stricter penalties than the Senate. Those include punishing local and state officials who do not fully cooperate with federal immigration authorities with fines, suspensions and removal from office.

If the Senate waters down the enforcement portion of the bill and sends it back to the House, Speaker Jose Oliva, R-Miami Lakes, said he would be willing to look at the Senate proposal.

“Fines are important at making sure people adhere to the law and to their job,” Oliva said. “The most important part is that the bill stay consistent with what it’s trying to achieve.”

That comment is in reference to an amendment Sen. Jose Javier Rodriguez, D-Miami, was able to get in the Senate bill last week to exclude employees of the Florida Department of Children and Families from fully complying with federal immigration law, such as sharing information about undocumented immigrants.

The legislative session is expected to end Saturday. But lawmakers on Saturday likely will only deal with the state budget and budget-related bills, which would mean the sanctuary city issue would need to be resolved Friday.

Democrats are already brainstorming about procedural tactics they can use to stall passage of the bill.

"The bill is in trouble, and they know it," said Rep. Carlos Guillermo Smith, an Orlando Democrat who has vowed to derail the bill and hopes time can still work in favor of his plan.