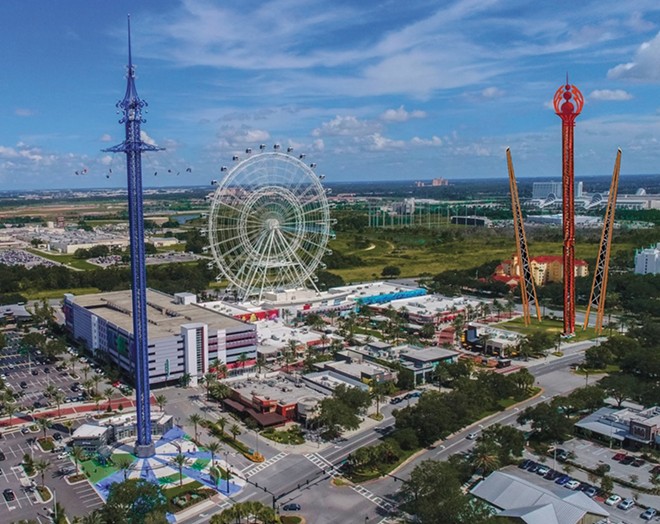 The drop tower, called the Orlando Gyro Drop Tower, will be the taller of the two attractions. The tower has a decorative crown similar to the StarFlyer's. Posts by Icon Park have stated that the tower will be 400 feet tall, but currently, the world's tallest drop tower, at 415 feet, is Zumanjaro found at New Jersey's Six Flags Great America. That tower is attached to the side of a roller coaster, though.

Icon could be referring to the tallest freestanding drop tower, which is the 377-foot tall Giant Drop in Australia. Either way, it will hold the record for the tallest gyro drop tower. The renderings confirm that the drop tower won't be the highest one, which remains the 160-foot tall Big Shot that sits on top of the 921-foot tall Stratosphere Tower in Vegas.

The Slingshot is similar to the current world's largest, which sits less than a mile up the street at Magical Midway. That tower, also by Funtime, is roughly seven stories shorter than the 300-foot tall one planned for Icon Park. Guests on the slingshot will be flung nearly fifty stories into the air. Previous announcements mentioned that this will be a dual-loading slingshot, allowing for one group to be loading while another is experiencing the attraction, but newly released concept art shows a more traditional single-load system.

These aren’t the only projects in the pipeline for the entertainment complex. A powered zipline was approved last year at the same time as these projects. Also previously announced is a $15 million, 15,000-square-foot Blake Shelton-branded dining and entertainment venue Ole Red. An Element by Westin hotel is also currently in the works. Despite not appearing the in the concept art, a small retail building will be constructed near the plaza where the Orlando Gyro Drop Tower and the Orlando Slingshot will be located, similar to the one found at the base of the Orlando Starflyer.

The two new record-breaking tower attractions will open next spring.