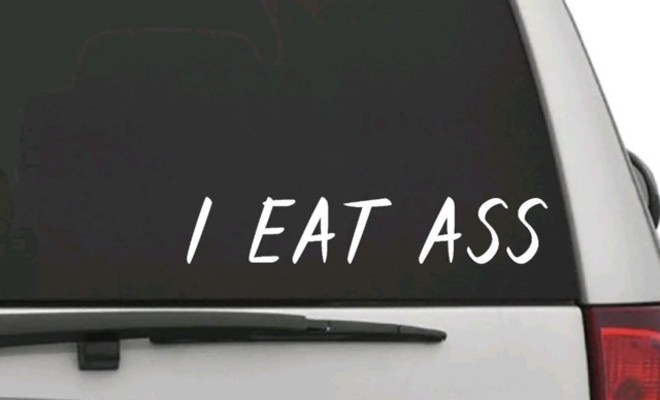 A Florida man is claiming his First Amendment rights were violated after he was arrested Sunday for sporting an "I Eat Ass" sticker on his truck, which is apparently a violation of the state's obscenity law.

According to the Lake City Reporter, 23-year-old Dillon Shane Webb was pulled over on Highway 90 after an officer with the Columbia County Sheriff's Office spotted his "I Eat Ass" sticker on the back of his Chevrolet truck.


The deputy claimed the sticker violates Florida Statute 847.011, which deals with possession and distribution of obscene material.

When the deputy confronted Webb and a passenger about the sticker, Webb said they were “just words,” according to the report.

The deputy asked Webb how "a parent of a small child would explain the meaning of the words," to which Webb replied that it would be "up to the parent," the report states.

The deputy issued Webb a notice to appear at the Columbia County Courthouse on May 23 before taking a photograph of the sticker to place into evidence.

In an effort to make the sticker slightly less offensive, the officer then instructed Webb to remove one of the letters. Webb refused and cited his First Amendment Right to announce to the world his love of eating ass.

Webb was then booked at the Columbia County Detention Facility. It's safe to say this case is about to get tossed.