There are exceptions, of course. But often, the prospect of an actor dabbling in music (and vice versa, TBH) draws reaction that ranges somewhere between a raised brow and an eye roll. Thankfully, Austin native Alejandro Rose-Garcia – aka Shakey Graves – is the genuine article and his status as a young Americana prince warranted.

When you play solo, there’s nothing to hide behind. And though Shakey Graves now plays as part of a full quartet, his early roots as a one-man band are still clear. There’s the self-contained economy and instrumental ingenuity like his foot drum suitcase a la Fort Defiance. But his fundamentals of playing and expression are where his solo grip truly lies.

First, he’s got legit fingerpicking technique. And then there’s his limber rasp-howl, a convincing voice that breaks and resonates in stirring ways. Even with just voice and guitar, Rose-Garcia’s strength of rendition easily filled the music hall. Add in his one-man-band arrangement and the fact that he does it with an advanced level of polished dexterity and you’ve got a lot of show in just one body.

And solo is where he’s at home, where he shines.

It’s how he opened the performance for the first 20 minutes and closed the main set. Even coming off the full band songs, there’s no real step down in action when he’s up there alone.

Backed by a better stage set than most plays, he stretched the holy trinity of country, blues and folk from one side of the tracks to the other. On the rawer end, Rose-Garcia showed some garage-licked grease that could hang with the Black Keys and Jon Spencer, no surprise from someone inspired by the almighty Bob Log III. But Shakey Graves’ newer material is showing more expansive ambition into indie rock artistry with some Kings of Leon wingspan. All of it was played live with professional precision.

As this fervent crowd proved, it’s a clever needle that Rose-Garcia threads, juggling dust and diesel with pop appeal. From knowledgeable Americana heads to folk freshmen, it’s given him currency across the sizeable indie-folk crowd without having to resort to the vanilla of the Mumfords and Lumineers of the world. Shakey Graves’ blend of grit and craft, tradition and modernity, is a palpably auspicious recipe and is as trusty of a popular gateway to the roots as they come.

Opening was Lakeland’s Michael McArthur. Clear and reflective, his Americana is squarely in the songwriter tradition, sung in a style that places the lyrics above all else. With soft but serious threads of folk and pop, his brand of exploration is a quiet one of self and situation, suited more for a bedroom or window pane than a bar or honky-tonk. It’s subtle but soulful. And it was greeted with lots of warm home-state love. 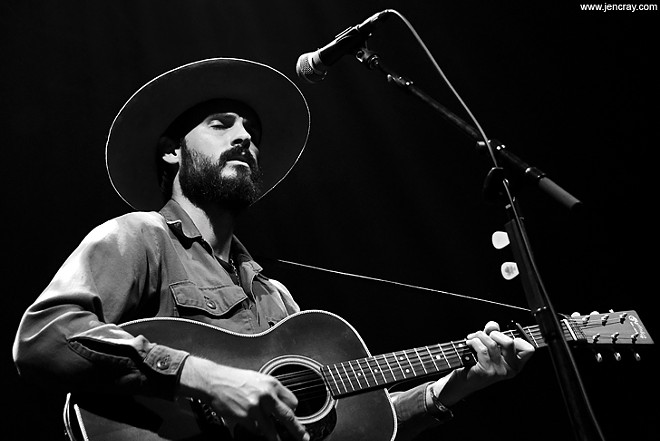