Turns out you can't bring CBD oil to Disney World despite it being sold on store shelves across Florida.

Hester Jordan Burkhalter, a 69-year-old great-grandmother with arthritis, learned that the hard way after she was arrested at the Orlando theme park last month when an off-duty Orange County Sheriff's Office deputy found the cannabis-based product in her purse at a checkpoint, according to the police report. The glass bottle said it contained a peppermint CBD tincture with zero milligrams of THC, the chemical contained within cannabis that gets you high. 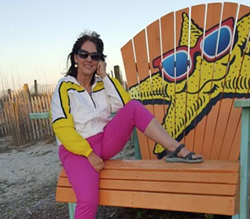 Burkhalter, who lives in North Carolina and was on the trip with family, told Fox 35 that she had been planning the trip for two years.

The arrest, however, would land her a felony charge and a 12-hour stay in jail before posting a $2,000 bond, despite the note from her doctor that Burkhalter had in her purse at the time of the arrest.

On April 15, Deputy Vernon Lebron "was working in an off duty capacity at Magic Kingdom" when he was notified by security personnel that someone may be using "illegal narcotics believed to be THC oil," according to the Orange County Sheriff's office's report. Upon inspection of Burkhalter's purse, Lebron asked if the product contained THC, to which she replied, "Is there a problem?" She then refused to answer whether it contained THC.

From there, the report states that Lebron tested the glass bottle for THC using a "marijuana presumptive drug test kit." The results indicated the color red, indicating a presumptive positive result for the euphoric chemical.

That's when Burkhalter was arrested.

Although CBD-infused products are being sold in the Sunshine State after a 2018 federal law legalized industrial hemp (the plant CBD is extracted from) as an agricultural product, it's still illegal in Florida. State lawmakers have passed a hemp bill to create a regulatory framework for the industry, but it still needs to be signed into law by Gov. Ron DeSantis.

The charges against Burkhalter were later dropped.

Jennifer Synnamon, the attorney representing Burkhalter, told Fox 35 that "a little drop of oil, with the CBD, is a felony. Meanwhile, you can have up to 19.9 grams of leaf-marijuana, and it's a first degree misdemeanor."