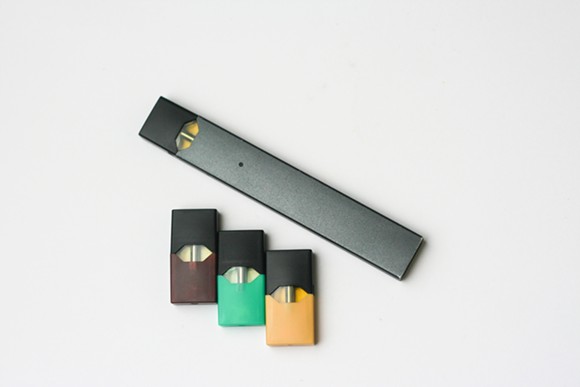 A Sarasota teen's addiction to e-cigarettes has triggered seizures, a new lawsuit says.

The family says that their daughter Ashlyn began vaping after friends at school introduced her to the product, which quickly turned into the teen missing classes to vape and soon after, becoming addicted.

Keep in mind, one Juul cartridge contains the same amount of nicotine as a pack of cigarettes.

Recently, Ashlyn was pulled from school due to seizures, which the parents say is a possible side effect from nicotine use.

In an interview with Spectrum News 9, Erin NesSmith explained that once her daughter started using the e-cigarette she didn't have a care in the world.

This sounds like an Onion article, but it is all too real.

Within the lawsuit, the NesSmiths are claiming that Juul purposely targets teens through their "flashy" advertisements and fruity flavors. And because the pen is so sleek, teens can easily hide it from parents and teachers.

Erin also claims the daughter didn't know there was nicotine in the device until she was having those urges to constantly have it.

After failed attempts at disciplining their daughter for using the pen, the NesSmiths are suing the company to also raise awareness about Juul being used in schools and to urge a change of advertisement of the product.

In a statement, Juul spokesperson Ted Kwong says Juul Labs is "committed to eliminating combustible cigarettes, the number one cause of preventable death in the world."

"Our product is intended to be a viable alternative for current adult smokers only," Kwong says. "We do not want non-nicotine users, especially youth, to ever try our product. To this end, we have launched an aggressive action plan to combat underage use as it is antithetical to our mission. To the extent these cases allege otherwise, they are without merit and we will defend our mission throughout this process."