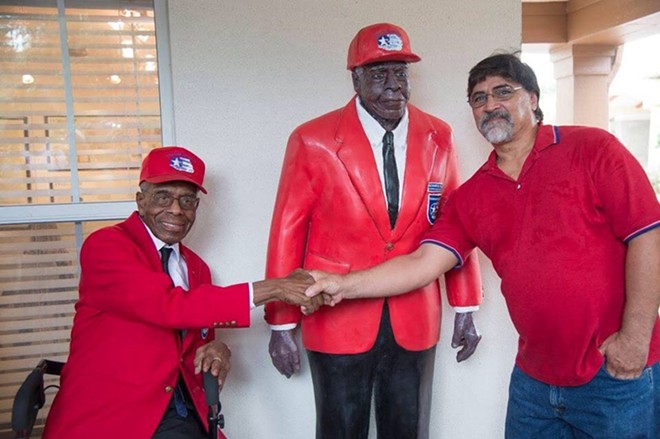 Winter Park Police received a call on Monday morning reporting the statue, which stands on the front porch of the Heritage Center, had sustained “an 8-inch hole in the gut.”

CMSgt Hall is 95 years old and lives nearby in Maitland. The statue has resided on the front porch of the Hannibal Square Heritage Center since October 2015, when Hall attended a dedication ceremony. Hall lived in West Winter Park for many years, according to a press release sent Thursday by the Crealdé School of Art, which notes Hall is still a member of Mt. Moriah Missionary Baptist Church in Hannibal Square.

Hall has been notified of the vandalism and is understandably sad about it. He declined to release a statement, but fellow military veteran and member of the Tuskegee Airmen Darrell Gray made a tearful statement Monday, starting with “This is personal.”

“Almost 80 years ago, a distinguished sector of Americans were denounced and restricted from how they were able to serve their country during WWII,” said Gray.

“In the face of doubt, they heroically amassed a record of incomparable performance in aerial combat. These Americans are the Tuskegee Airmen. The defacing of the statue of Tuskegee Airman CMSgt Richard Hall ... may indicate that these pre-existing doubts still exist. This vandalism is unacceptable, and will not be tolerated."

"Who [Hall] is and what he stands for has been reduced, defaced and vandalized in effigy; but that’s not what he is. He’s a hero,” said Hannibal Square resident Lawanda Thompson.

Nicki Drumb, Crealdé School of Art's marketing manager, emailed the press announcement about the vandalism Wednesday. "It is with a heavy heart," the message began.

When contacted, Drumb said the statue was originally conceived when internationally recognized artist Rigoberto Torres had an exhibition at Crealdé.

“We wanted to have a permanent fixture of Torres’ work and people from the community came to us wanted him to commission the statue of Richard Hall, who was raised in Hannibal Square and attended Hungerford Prep in Eatonville and went on to become one of the Tuskegee Airmen,” said Drumb.

“Torres always creates live castings of everyday people from the community. Hall has historic significance and the statue links to him as our local hero.”

Drumb says Torres is already working with the Heritage Center on plans to repair the sculpture.

“We expect a thorough investigation,” said Hannibal Square Heritage Center manager Barbara Chandler. “This is a local community issue, a cultural, historical, and an American citizenship issue. It impacts us all.”
When asked if he thought the vandalism could be a hate crime, Chandler said, “We don't know what to call this. But we know this was intentional. We need to know who the vandal – or vandals – are. If anyone knows anything about this, they need to contact the Winter Park Police immediately.”

The Winter Park Police Department is requesting the public’s help in their investigation and requests anyone with information call 407-644-1313 or CRIMELINE: 800-423-8477.