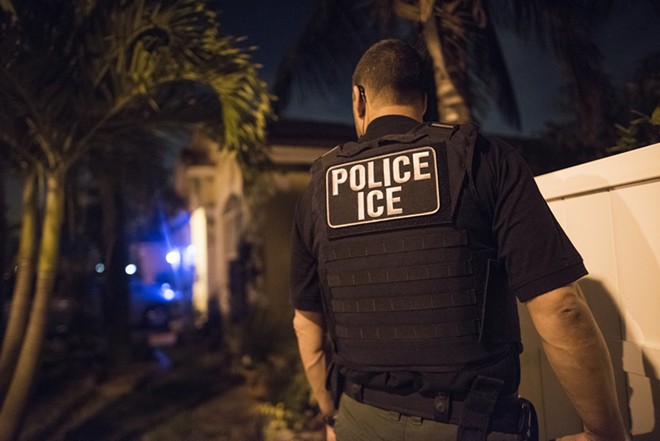 The head of Florida’s prison system last month told a top federal immigration official he would like to launch a pilot program that would deputize state correctional officers as immigration agents in an effort to “identify and process criminal aliens.”

If approved, Florida would become the fourth state to launch such a program at a state-run prison. State Corrections Secretary Mark Inch wants to start the program at the Northwest Florida Reception Center in the Washington County community of Chipley.

Participation in the program would allow the state to “better serve the residents of the state of Florida and the U.S. Immigration and Customs Enforcement Agency,” Inch wrote to Ronald Vitiello, who served as ICE deputy director before being ousted by President Donald Trump around the time the letter was sent.

“This program will allow (the Florida Department of Corrections) to enter into a Memorandum of Agreement with ICE to identify and process criminal aliens who may pose a risk to public safety in Florida,” Inch said.

The request to launch the federal immigration enforcement program, known as 287(g), came as Gov. Ron DeSantis pushed local governments to implement the program at county jails. It also came as state lawmakers passed legislation that would force local law-enforcement agencies to hold undocumented immigrants in custody for up to 48 hours if a federal immigration agency sends detainer requests for them.

DeSantis, who has taken a hard-line stance on immigration enforcement, is expected to sign the legislation despite opposition from immigrant-rights groups and Democrats, who argue, in part, the state would likely end up helping deport more undocumented immigrants who are arrested for minor, non-violent crimes.

Sen. Joe Gruters, a Sarasota Republican who sponsored the bill, argued it is meant to target “criminal illegal aliens,” who are the “worst of the worst.”

In his letter, Inch said the state would “use its best efforts” to launch the pilot program. He added that he would like to train about five correctional officers to act as federal immigration officers.

It was not clear why Inch picked the Northwest Florida Reception Center, which has capacity for about 1,300 male inmates. Officials at that facility did not immediately return requests for comment.

Arizona, Massachusetts and Georgia are the only states with corrections departments that have entered into agreements with ICE.

Under those contracts, the states are responsible for covering all travel, housing and per-diem costs associated with a four-week basic training program in Charleston, S.C. The states are also required to cover the costs of a “one-week refresher” training program, which is done every two years.

In February, DeSantis called on more local law-enforcement agencies to work with the federal government to ensure “accountability and justice are being upheld throughout the state.”

“We take our responsibility to protect our citizens, foster safe communities and uphold the rule of law very seriously,” DeSantis said on the day that he directed Inch to “review” the 287(g) program and “prepare a strategy to participate.”