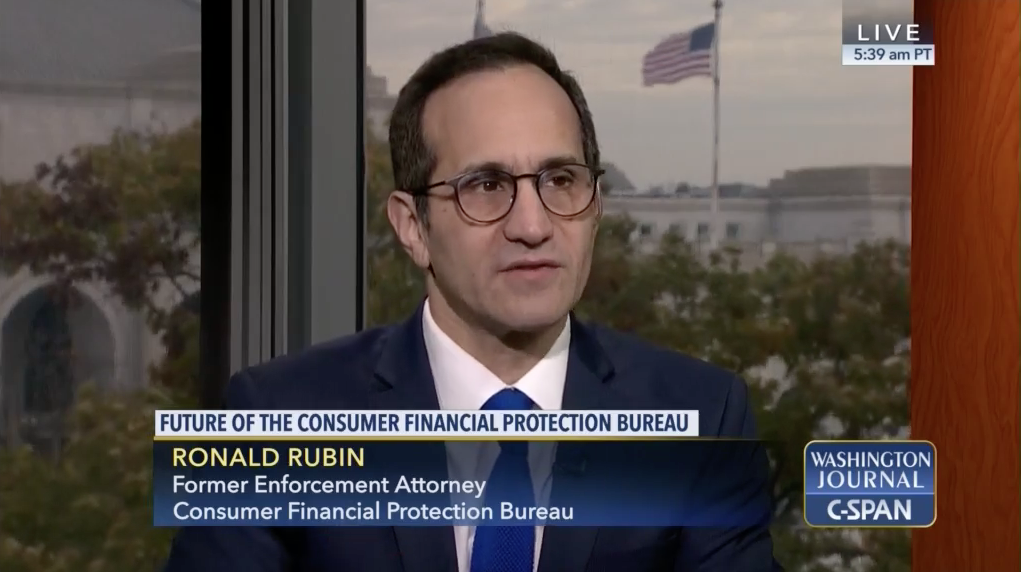 Ronald Rubin, recently hired as the state’s top financial regulator by Gov. Ron DeSantis and the Florida Cabinet, has been placed on administrative leave amid an investigation into alleged inappropriate behavior toward an employee.

State Chief Financial Officer Jimmy Patronis, a member of the Cabinet, announced the move late Friday and released a sexual-harassment complaint. Rubin, the commissioner of the Office of Financial Regulation, was selected in late February for the $166,000-a-year job.

“Every person deserves to feel safe and respected in their work environment,” Patronis said in a prepared statement. “That standard is non-negotiable.”

Abigail Vail, chief of staff to Rubin, is leading the day-to-day business of the office in his absence.

Jamie Mongiovi, a spokeswoman for the Office of Financial Regulation, said the office isn’t commenting at this time. Rubin didn’t reply to requests for comment. He declined to comment to American Banker magazine for an article posted online Saturday.

Peter Penrod, general counsel of the Florida Department of Financial Services, recommended the suspension of all work-related activities for Rubin “until such time that the Cabinet has an opportunity to formally review this matter and take such action deemed necessary and appropriate.”

Patronis, who runs the Department of Financial Services, said he directed his inspector general to begin a preliminary investigation and said he intends to get additional input from the other members of the Cabinet, which includes Moody and Agriculture Commissioner Nikki Fried.

Moody, who is waiting for the inspector general’s findings, also described the allegations as “deeply troubling.”

“If they are true, the Cabinet should strongly consider the termination of Commissioner Rubin,” Moody said in a statement on Monday. “This should be addressed at an emergency Cabinet meeting in full compliance with Florida’s Sunshine Laws.”

The copy of the sexual-harassment complaint released late Friday by Patronis’ office includes significant redactions and does not give the name, job title or even gender of the employee. But it indicates the alleged incident involved a relatively new hire.

According to the complaint, Rubin and the employee were walking to lunch at Harry's Seafood Bar & Grille in Kleman Plaza near the Capitol. On the way Rubin suggested they first visit his condo to see recent renovations.

Inside, Rubin told the employee to remove shoes so as not to track dust inside. Rubin also removed his shoes before they viewed the condo. The employee described this as an “uncomfortable situation” in the complaint.

During lunch, Rubin inquired about the employee’s parents and Rubin talked about his own siblings, including a sister who recently got married and had a son.

“The commissioner also told me that they had supposedly only had sex twice while they were married,” the employee recounted, according to the complaint. “He then told me he was talking to his parents at one point and his dad made the comment that him and his mother were very fertile.”

Before heading back to the office, they returned to Rubin’s condo so he could talk to some painters.

The next day, Rubin invited the employee to a conference in Washington, which was declined. Rubin then offered the keys to his apartment in Washington “if you ever get the chance to go up there,” the complaint said.

The employee started to avoid Rubin and was moved to a different job after inquiring if there were other positions available, as the situation was “awkward” and “uncomfortable.”

The complaint noted that the employee was “assigned other special projects to work on.” But the employee indicated continuing discomfort.

“Having the separation and space by being in a different physical office helps,” the employee said in the complaint. “However, I feel like my opportunities to get to know my coworkers and people in this agency have been hindered by inappropriate and uncomfortable circumstances.”

The employee declined attending employee-appreciation events during one week to avoid Rubin, the complaint said.

“I was invited by colleagues on my new floor to grab tacos and a donut on both of those days, but I politely declined as I knew the commissioner would be attending and I did not want to recreate any uncomfortable situations,” the employee said in the complaint. “On the day of the ice cream social the commissioner went around to each office to hand out ice cream treats on my floor. I stayed in my office with the door closed until he had passed in another effort to avoid him.”

The Office of Financial Regulation, which oversees state-chartered financial institutions, securities firms, finance companies, money-service businesses and debt collectors, has an operating budget of about $41 million a year and nearly 360 employees.

Rubin was working as a freelance writer after serving in 2015 as senior counsel and chief adviser for regulatory policy on the majority staff of the U.S. House Committee on Financial Services.

Rubin, who was with the Securities and Exchange Commission from 1996 to 2003, has also been a senior special counsel for the Financial Industry Regulatory Authority and a managing director of the legal and compliance department at Bear Stearns.

Rubin and Charity were the only candidates invited to interview for the job from nearly 30 applicants.

The commissioner’s job opened last year when former Commissioner Drew Breakspear resigned under pressure from Patronis. Patronis pointed to a “lack of cooperation, responsiveness, and communication” from Breakspear’s office. Breakspear disputed the claims.

DeSantis and the Cabinet are expected to meet during a trip to Israel the week of May 27. The next scheduled meeting in Florida is June 4.