The In-Between Series has such an established tradition of avant-garde music that Tape Studies – who were the featured act at this most recent edition of the monthly event – seem almost square by comparison. Not to give anyone an unnecessary complex or anything, but I’ve seen performers use things like potted plants and water as instruments here. That’s not to say, however, that the relatively new Orlando band are unworthy. On the contrary, they were a nice balance to the series’ usually unflinching esotericism.

Tape Studies may be conventional next to some of the performers that have played the In-Between Series but their instrumental music is not dumb commercial stuff. Rendered with rock instruments, electronics and electric cello, it’s a sound that comes from the beautiful side of post-rock.

Though they started on a tranquil wavelength of suspended shimmer, the arc of their set became increasingly panoramic from there, flashing alternating passages of ignition and near-shoegaze thrust. And even though it was exciting to see a gallery get rocked like this, they showed enough charged tectonics in their sound that a proper rock club is probably the best milieu in which to experience their sonic range.

In the post-rock spectrum, Tape Studies play more on the dramatic end with clear melodic and dynamic intent. Where other fellow travelers may weave a more ambient vibe, this Orlando trio instead paint with definition and make their point with sharpness. 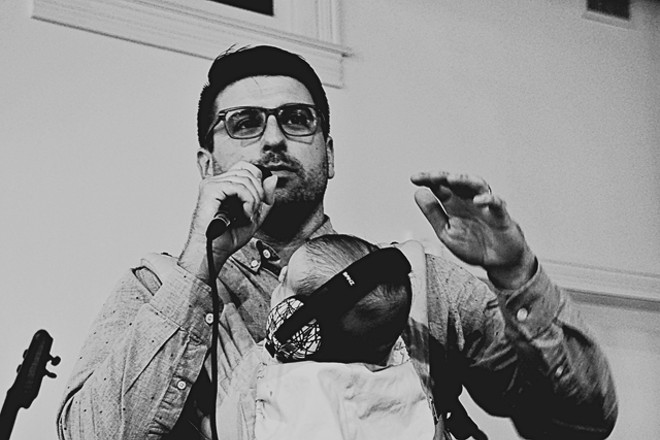 The open audience Q&A after the performance is a somewhat regular feature of the In-Between Series and is always illuminating. But, as a direct glimpse into the performers’ artistic DNA and background, having one for a startup local band like this is especially worthwhile.