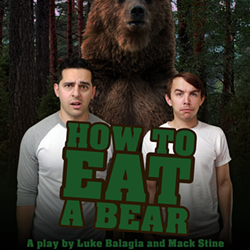 According to the old adage, the best way to eat an elephant is one bite at a time. Apparently the same cannot be said for bears, because the first-time Fringe writing/directing/producing team of Luke Balagia and Mack Stine prove with How to Eat a Bear how delicious biting off more than you can chew can be.

Balagia and Stine star as Mark and Dave, a pair of college-dropout dude-bros who are inspired by the old Apple II edutainment game Oregon Trail to sample some bear meat. After ill-fated attempts to secure ursine steaks from Publix and the local zoo, the bumbling duo set off into the woods on the most ill-conceived hunting expedition since Elmer Fudd declared it was “wabbit season.”

In Mark and Dave, Balagia and Stine have created the millennial answer to Beavis and Butt-head, a classic comedic coupling of innocent ignoramuses who slouch in the proud footsteps of Cheech and Chong or Jay and Silent Bob (just without the explicit stoner jokes). The show also sports a solid supporting trio (Danielle Burch, Brianna Barrett, and Paul Ebert as the necktie-wearing bear), some superbly stupid props, and even a supportive message about perseverance, no matter how perverse your pipe dream. Balagia and Stine's script successfully straddles the line between dark satire and cartoonish slapstick, and apart from a slow segment at the half-hour mark, they mostly manages to maintain their manic momentum right through the musical finale.

If you’ve got a healthy hunger for lowbrow humor, How to Eat a Bear is this Fringe’s must-see carnivore comedy.