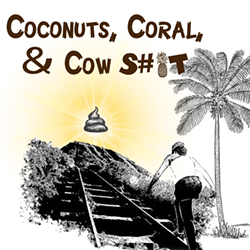 Sara Kunz starts her one-woman show standing on a precipice, staring into her own extinction, and ends it wiping crap off her clothes. That’s a pretty apt shorthand for the autobiographical odyssey she takes audiences on in Coconuts, Coral, and Cow Shit, climbing from the depths of depression to peaks of comedy, and then back down the mountain again.

Once a vivacious, adventurous circus artist, Kunz abruptly quit her dream job hula-hooping in Berlin and scuttled back home to Hawaii. After weeks of self-medicating with wine and Cheetos, she set off on a suicidal hike up the dangerous Koko Head Crater Trail with only her amusingly passive-aggressive personal assistant for company, and had an epiphany about the meaning of her life on the edge of an 800-foot abyss.

Kunz recounts – using a mix of direct address monologues, one-sided phone calls, and re-enacted therapy sessions – the traumatic origins of her emotional baggage, and the story of how she began to put it down and move beyond self-recrimination. Her deeply intimate tale goes to some really dark places [sexual assault trigger warnings apply], and has no rousing resolution, but that doesn’t mean Kunz wallows in victimhood. On the contrary, Kunz exposes an unexpectedly hilarious side of mental health issues without ever seeming exploitative or exploited. If only she had a director to help her smooth and tighten her transitions (both scenic and tonal), this could be a strong contender for one of the top solo shows of the Festival.