Fringe 2019 Review: 'Dandy Darkly's All Aboard' 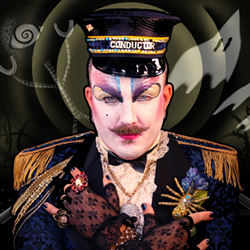 Dandy Darkly (aka New York-based writer/performer Neil Arthur James) may look like Captain Spaulding raided Elton John’s closet and commandeered the Polar Express, but don’t judge this book by its glittering cover. In All Aboard, Darkly invites his audience on an express ride into the dark heart of gothic Georgia, where long-buried ghosts are still as close as the local superstore. Dandy’s prior Orlando performance featured fascinating but unconnected monologues; this time, he uses his melodious voice to weave a complex, continuous web which connects the KKK with capitalism, crappy kids’ television shows and Christianity.

Darkly casts an enchanting incantation of alliterative language that dances along the border between spoken word poetry and musical performance art, as he projects a 3-D movie on your mental movie screen. His oral ornamentation is occasionally so dazzling that you become distracted from the darkness he’s delving into, but then the painful reality of American intolerance slaps you in the face. Grotesque, profane, profound and laugh-out-loud funny, Dandy Darkly’s All Aboard is exactly the kind of one-of-a-kind experience Fringe was invented for.