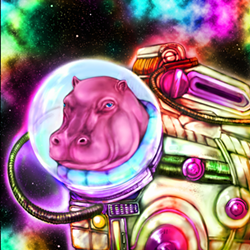 There’s a subtext of existential dread underlying many shows at this year’s Festival, but leave it to Space Hippo to make that unspoken angst explicit in this unexpectedly sophisticated surreal knee-slapper. Scientists warn that life on Earth will be extinguished in only five years, but instead of doing something sensible to stop our extinction, short-sighted politicians decide to distract the public from their imminent demise by launching a hippopotamus towards the sun. The hippo, accompanied by a sentient snack dispenser, gets sucked into an intergalactic war between alien species and eventually evolves into an intergalactic deity.

Canadian Daniel Wishes and Japanese actress Seri Yanai use little more than their voices and DIY projections to bring to life an absurd hero’s journey that’s more epic than most billion-dollar blockbusters. This was easily the most imaginative entry I’ve seen in the Festival’s swiftly expanding shadow-play subgenre, and these actors’ pinpoint synchronization with Elliott Loran’s catchy glam-rock musical score doesn’t let a single second go to waste. Space Hippo is the funniest plea for climate change action I’ve seen since Bill Nye’s profane viral video, and a perfect example of what Fringe is all about. Don't miss this 'mus!