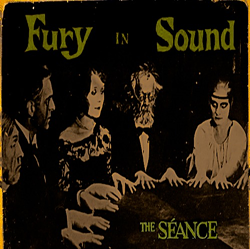 If we’ve learned anything from the Evil Dead franchise, it’s that going into the woods and reading incantations from an ancient tome rarely ends well. So consider this fair warning: When four friends (Esteban Vilchez, McKenzie Jo Frazer, Christopher Baker, Amanda Lane Decker) gather on the fringes of the Fringe beer tent and begin fooling around with a Ouija board, watch out for full-bodied possessions and other freaky phantasmagorical manifestations.

Don’t panic, it’s all part of the fun in Fury in Sound: The Séance, a fantastically inventive mini-opera from local director Scott Browning and international composer Nathan Felix.

Participants in this “silent musical” listen to the performance through headphones while following the actors around Loch Haven Park. While this would still be a thrillingly original spookfest if the audio had all been pre-recorded, there’s actually a chamber orchestra (Symphonic Underground, led by Daniel Cortes) and choir performing the score live on an adjacent lawn.

The cast of young vocalists have voices powerful enough to rouse the dead, and the storyline – involving the invocation of a murdered woman’s soul – is brief but involving. The wireless headset technology functioned smoothly (aside from some short-lived feedback), and there’s even a perfectly timed jump-scare special effect. Best of all, Felix’s goosebump-raising score offers an eerie idea of what it might sound like if the composers of Les Miz wrote a musical version of The Exorcist.

Fury in Sound is by far the most polished experiment in immersive audio I’ve yet experienced, and the best way to spend 30 minutes outdoors at Fringe that doesn’t involve cheese curds.