Band of the Week: Viedma 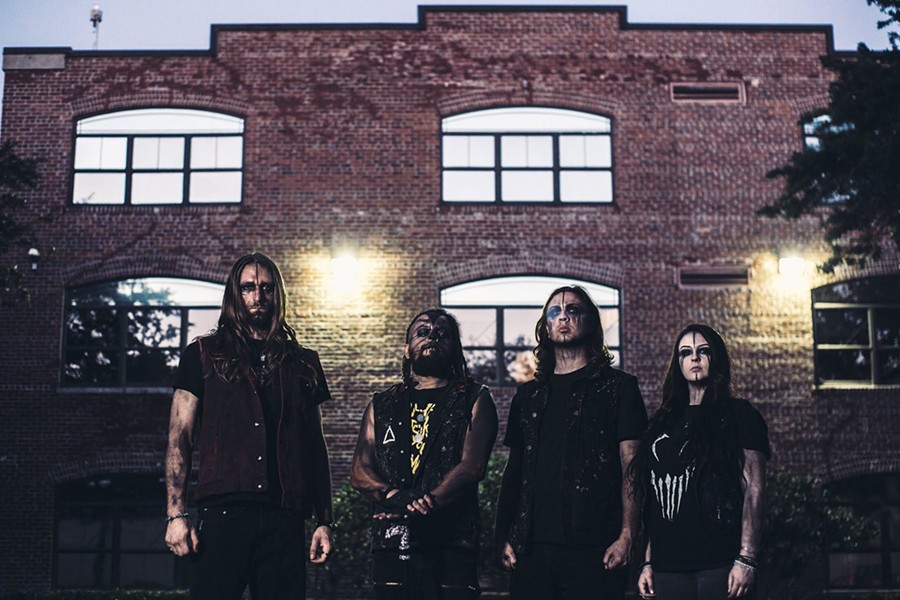 Welcome to Orlando Weekly's "Band of the Week." Every week, we highlight one of our favorite local bands. This week, we're pleased to bring you Viedma.

Viedma are playing May 25 at Will's Pub with Massacre and Druid Lord.

When did the band form?
The individuals you see before you converged amid the Summer Solstice Of 2017.

Who's in the band?
As you see them: Albert assigns his vocal talents, Zachary conducts the six stringed guitar, Emily controls the rhythm section via bass and Geoff reverberates via the stationary percussion.

Currently available releases:
At this time, you may view them in their standardized attire on YouTube. We have recruited the famed Drigo Steel to format an audio release in the not too distant future. This release will emanate from the Melrose Center in Downtown Orlando.

Describe your sound in five words:
While five words may not be enough to describe The Age of Ash, we would primarily choose: Aggressive, Pensive, Analogous, Unique and Powerful.

What has been your most memorable show so far?
Without question, the gathering in support of Mushroomhead and Ventana, along with the Hellzapoppin' Sideshow as a part of the Madness & Mayhem Tour, stands out as most memorable. The honorable Bruce Cataldo and Clint Pinder had agreed to host the christening of our message en masse after some deliberation. This became the formative start to our mission to spread our doctrine of growth by fire.

Which local band is your favorite one to play a show with? Why?
While we have enjoyed our time alongside many of Orlando’s best talents, we would choose Withering Earth and Varanger as our favorite companions on this journey. These two bands paired, with their melodic nature and outstanding stage performance, have always impressed us. To have watched how they've grown since their inception to this day is absolutely amazing. They have been the most supportive, caring bands we know, and it has been an honor to play with them.

What description gets used for your band that you would most like to correct people on? Why?
Many at first glance tend to confuse us as death metal or black metal, but the music speaks for itself; that's just not the case. Both lyrically and rhythmically we prefer to characterize ourselves as a spiritual journey or a quest. We believe music is best articulated by expressing your emotions and beliefs in an art form such as music. Hands down, we are good ol' "Rock n' Rolled in Metal."  Going with the theme of Viedma, you can just call us Lava Rock.

What’s your favorite thing about being an Orlando band? What's your least favorite? Why?
The best aspects of emanating from Orlando would be the diverse and welcoming individuals Viedma has had the pleasure of performing with. Seeing the exponential growth of the music scene through the support of other local bands and promoters has been a heartwarming and exciting sight to witness.

A regrettable aspect would be the current state of affairs; Our message is intended to reach far and wide and while Viedma has enjoyed the fruits of this labor, they are well aware of the coming tasks and wish to grow further in recruiting others to the cause.

Any big news to share?
There is no shortage of activity from The Sanctuary; many more gatherings to come, as well as a short film The Organization has sanctioned highlighting the growing movement and impact of the Age of Ash. Too long have people meandered about their lives searching for something more. They have arrived to reveal that dogma to all those who would accept it.

The Heard band of the week viedma