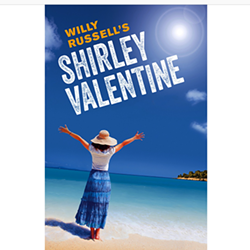 Local legend Sarah-Lee Dobbs and director Laurel Clark, the team behind 2015’s Critics Choice pick Tell Me on a Sunday, bring Willy Russell’s Tony-winning dramedy Shirley Valentine to the Orlando Fringe in this powerfully funny portrait of mid-life rebirth. Shirley is an empty-nest English housewife with an emotionally absent husband, who resorts to talking with the wall for companionship. When she exits her home for an unannounced fortnight holiday in Greece, everyone assumes she’s going to have a scandalous affair, but it’s really her own lost lust for living that she’s searching for along the sun-soaked sand.

Russell’s script is like a British sex farce without most of the sex, and Dobbs deliciously wrings every last laugh out of Valentine's amusingly dated 1980s-era attitudes towards dating and feminism. But there’s also a deep range of real emotions buried inside this character, which Dobbs excavates with touching empathy. Kudos also go to Clark for guiding Dobbs’ well-modulated pacing and judicious use of the Brown Venue’s thrust stage, as well as for bringing along an impressive kitchen set, complete with four-burner oven and potatoes for peeling.

Shirley’s strong Liverpudlian dialogue may strain American ears during the opening scene, but give the accent time to settle in and you’ll discover once again why Sarah-Lee Dobbs is one of Central Florida’s most versatile female talents. Now if only Shirley Valentine were a musical, so she could show off her spectacular singing voice – that sounds like a surefire idea for next Fringe!