They might look cute now, but the Brevard Zoo's newest residents will soon be the stuff of nightmares

When the Brevard Zoo’s new Rainforest Revealed area opens this fall there will be a few more residents than the zoo had originally planned for - eight, to be precise. Four Brazilian whiteknee tarantulas and four Brazilian salmon pink bird-eating tarantulas, all still babies, are part of a massive wildlife trafficking case that saw 250 baby tarantulas confiscated by the U.S. Fish and Wildlife Service. It’s believed that the babies were bred with illegally caught wild tarantulas from Brazil.

The eight spiders at the Brevard Zoo will be used as part of the zookeeper talks, one of the many interactive elements planned for the new themed area. The Zoo’s director of animal programs, Michelle Smurl, says, “We hope to use these arachnids to help Zoo guests learn more about the importance of spiders and the impacts of wildlife trafficking." A small outdoor theater will host multiple events. “Sky trails” that link various habitat areas will also allow for spider monkeys and jaguars to explore the new space while also crossing over of guest areas.

Despite their small size now, these baby spiders won’t stay little for long. Brazilian salmon pink bird-eating tarantulas are some of the largest tarantulas in the world, with a legspan of 11 inches. The Brazilian whiteknee tarantulas will have a legspan of 8 and a half inches with a recognizable black and white pattern. 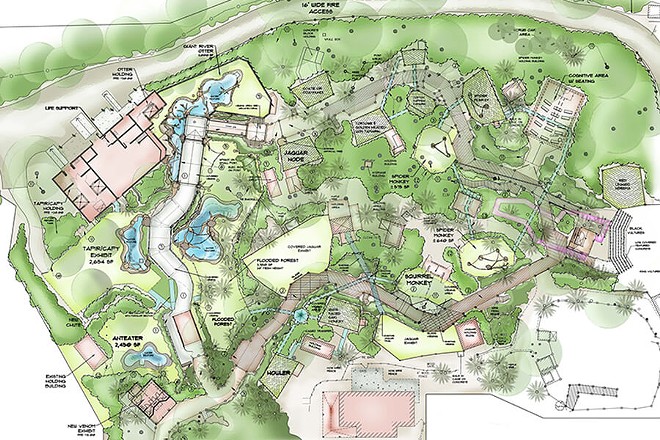 Rainforest Revealed is slated to open late fall. It is an update to the zoo’s La Selva area that opened in 1994. Many of the same animals that were in the La Selva area will call Rainforest Revealed home, but it will also be home to many new animals – including some red siskin birds. The endangered South American finch is currently not on display at any other zoo in the nation. Capybaras, giant river otters, roseate spoonbills, eyelash vipers, macaws, Orinoco geese, dart frogs, freshwater stingrays, giant anteaters and dwarf caimans will all be seen in the new section.

Since first opening in 1994, the Brevard Zoo has consistently been ranked as one of the best zoos in the nation.