When Spider-Man tells you to buckle up, you buckle up – as shown in new United Airlines safety video 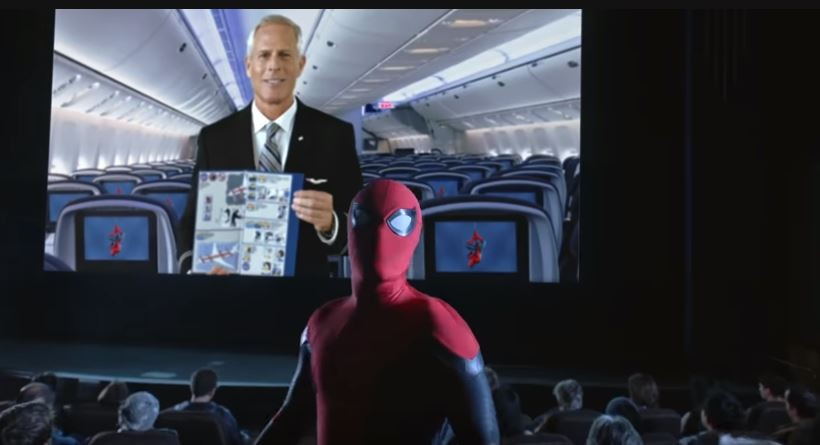 Airline safety videos aren’t known for their entertainment value, but United Airlines is trying to change that, thanks to a brand-new one featuring Spider-Man. The Easter egg-filled video is part of a marketing partnership between the airline and this summer’s Spider-Man: Far From Home that also includes United being the official airline for the movie. Multiple employees of United were also featured as extras in the film.

The safety video begins like any other, but quickly shifts to a scene in Mr. Delmar’s store in which three villains plan to cause some trouble but, thankfully, Spider-Man is nearby. The five-minute video features cameos from United CEO Oscar Munoz; actor Jacob Batalon, who plays Spider-Man’s BFF Ned; and Eugene “Flash” Thompson, played by Toni Revolori. Stan Lee is honored with a small framed photo in Delmar’s store. United’s updated paint job, the first since the airline’s merger with Continental, is featured in the film.

"For decades, Spider-Man has consistently shown the importance of using power to do good and to keep the public safe. We also believe that our greatest responsibility is to keep our customers and crew safe on board our aircraft," said United's Vice President of Marketing, Mark Krolick. "We are excited to have Spider-Man and his friends, along with our employees, bring new attention to the inflight safety video and creatively engage customers on such an important announcement."

The safety video is just a small part of how the airline is celebrating their new partnership with the film, which includes scenes of Peter Parker and his friends onboard a United plane. Amenity kits provided to those in business class will be Spider-Man: Far From Home-themed for a limited time. The amenity kits include a Spidey eye mask, socks, tissues, earplugs, a toothbrush, a pen, and luxury skincare products.

MileagePlus members can use their miles to bid on Spider-Man events, including a trip for two to the film’s premiere in L.A. on June 26. Other available activities include exclusive screenings in United’s seven hub cities. Some of the background actors seen in the safety video are also MileagePlus members who bid on the opportunity to appear in the video.

This isn’t the first time United has tried to make the required safety videos a bit more entertaining. In 2014, the airline launched a "Safety Is Global" line of videos that featured employees in exotic locations and in odd situations giving the safety spiel. It included scenes from exotic locations like Rio’s Carnival, India’s Holi festival, and a field with a kangaroo in it.
Movie-branded safety videos aren't anything new. Turkish Airlines has ones from both the first and second LEGO movies, and Air New Zealand debuted a Lord of the Rings-themed one in 2014.

The United safety video will run on select planes throughout this summer. Spider-Man: Far From Home will be released nationwide July 2.