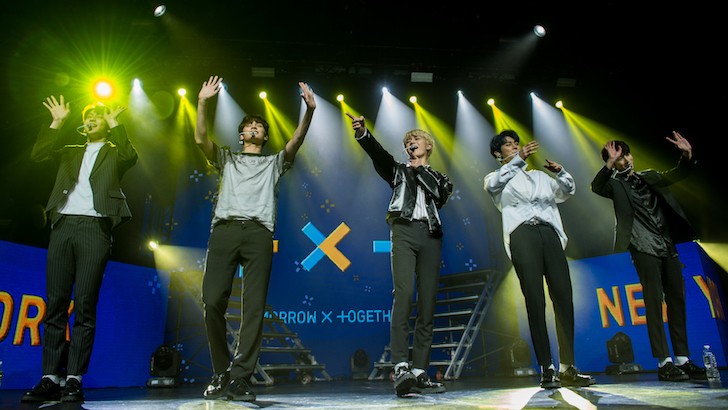 Tomorrow x Together, Plaza Live, May 14

To those uninitiated in the manic pop thrills of K-Pop, the Tomorrow X Together (TXT to their fans) "STAR in the U.S. Showcase" extravaganza at the Plaza Live might have seemed like a topsy-turvy, Blockbuster-themed game show. LED backdrops boasted vibrant blues and yellows with geometric stars that fell like snow, and a quirky department-store jingle accompanied the K-Pop group’s introductions as they hit the stage.

But make no mistake, TXT are serious, serious business. TXT members Soobin, Yeonjun, Beomgyu, Taehyun and Huening Kai make up this newest group from K-Pop lab Big Hit Entertainment, the company that hit gold with BTS (Bangtan Boys) in 2017. The members of TXT have some big shoes to fill as they follow BTS, the most successful K-Pop group of this decade, but their cutesy charm, banter, and fresh aesthetic won over the devout, sold-out Orlando crowd.

I was quickly lost in a whirlwind of screams, as entire rows of seats rocked with unrestrained enthusiasm, and it’s no wonder why! TXT’s dance performances displayed an unbeatable synchronicity despite the group’s primarily vocal talent, and they subverted the uniformity of most small-group dances with complex moves. The “stages” were punctuated by variety show-style games and banter. U.S. Showcases like these provide an assortment of spectacle and activity that make American audiences feel like they’re on the set of their favorite Korean variety show – for example, at one point there was an interactive game of questionnaire Jenga (in which questions from the fans were pasted onto Jenga blocks), littered with "I love yous," "aegyo" requests (aegyo means "act cute") and exclamations like, “I didn’t realize we were on the set of ASC!" (A wink-and-nod to the interview and game-based K-Pop video show After School Club.)

TXT is widely appreciated for their schoolboy charm and tunes so fresh you cannot help but feel the uplifting energy of youth. Their debut album The Dream Chapter: Star was released in early March, and the video for the hip-hop-flavored “Cat and Dog” premiered on April 24. Discover Tomorrow x Together on the web and stan the next big thing in Korean pop.