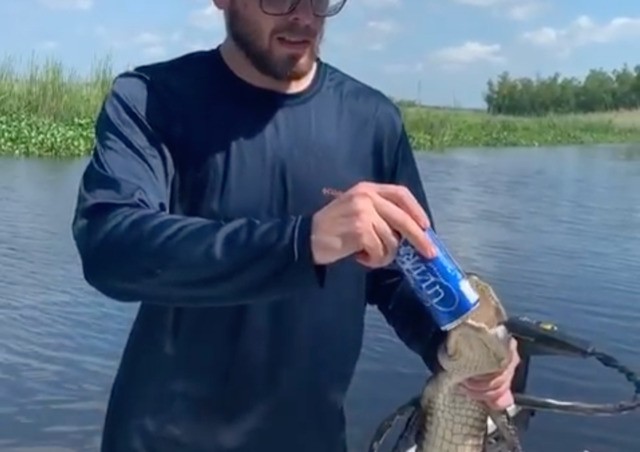 For some odd reason, people love to film themselves abusing animals.

A video of uncertain age (recently uploaded to Instagram by @504ollie) shows an unidentified man on a boat holding a gator by the neck, using its open mouth to puncture a can of Michelob Ultra.

The man then slams the beer and tosses the gator back in the water, while a “Hell yeah” can be heard in the background. Peak Florida (probably)!

The @504ollie account changed its settings to private, but the video has been re-uploaded to multiple accounts, including Drunk People Doing Things, where it has garnered over 3 million views.

It’s unclear at this moment if the video was shot in Florida or if this man is in fact from Florida, but cruelty to animals in this state is a first degree misdemeanor, and officials with the Florida Fish and Wildlife Conservation Commission have arrested people for far less.

In 2018, the FWC arrested a heavily intoxicated Florida man who carried a gator into a gas station, and earlier this year another Florida man was arrested for putting a cigarette in a gator’s mouth.

It’s worth mentioning that this is the second video in recent weeks to feature a boating dipshit filming himself mistreating wildlife. A couple of weeks ago, Clearwater lawyer Thomas Cope filmed himself and others yelling “So long, sucker,” to a raccoon they knocked off their boat 20 miles offshore.

Cope is now being investigated by the FWC and the Florida Bar.

Coincidentally, this is also the second video to surface showing an unidentified dudebro using an animal to open a can of Michelob Ultra. In 2017, the site Total Frat Move showed a clip of a gaggle of frat boys using a dead shark’s mouth to crack open a cold one.

We've reached out to the FWC, and will update this post when more information is available.