Girl
With shows like Hoodies and Commencement, producer/director Beth Marshall has earned her reputation for bringing hard-hitting, timely fare to the often-frivolous Fringe. Her latest offering may be her most difficult – and most necessary – to watch, because Megan Mostyn-Brown’s girl depicts in agonizing detail how young women are abused and discarded daily in our so-called civilized society.

Hannah (Chloe Shaw) is a 15 year old who is resorting to self-harm in the wake of her sister’s suicide; Lucy (Alexa Carroll) is tomboy teen tempted into running away with her abused boyfriend; Lydia (Rachel Comeau) is a free-spirited college student whose life is derailed by rape. Each of the three featured actresses deliver exceptional performances, especially considering their youth. In particular, Comeau blew me away with her complete commitment to emotionally excavating every last ounce of anguish and uplift from her character’s arduous ordeal.

This condensed version of a longer script sometimes felt a bit rushed, and I found the PowerPoint-style projections to be unnecessary. But if you can stand another story that will make you despair for humanity (or at least the male half), girl is a showcase for Orlando’s emerging generation of great actresses shouldn’t be skipped.
Gold Venue
Friday, May 24, 2019 6:30 PM
Sunday, May 26, 2019 7:00 PM 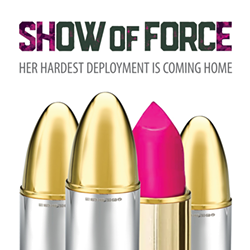 Show of Force
There are plenty of films and television documentaries glorifying the traditionally male military, but Beverly Coyle’s docu-play Show of Force is one of the few works of art that allows post-9/11 female veterans to tell their story in their own words. Director Michele Cuomo capably captains her brave young cast – Kierra Belgrave, Lillian McGuinness, Kristina Jimenez, Kaitlyn Read – through emotionally treacherous territory, from deploying despite newborn infants and newlywed spouses, to surviving nonstop psychological harassment and shockingly frequent sexual violence.
The script sometimes seems to be ticking off checklist of war clichés, and I wish more time was spent with the fascinating first-person monologues about the challenges of post-deployment reintegration, rather than the less successful dialogue scenes. Show of Force deserves a salute for setting aside ideology and jingoism to show us the real women behind the uniforms, and for allowing us civilians a better understanding why vets hate it when we say, “thank you for your service.”