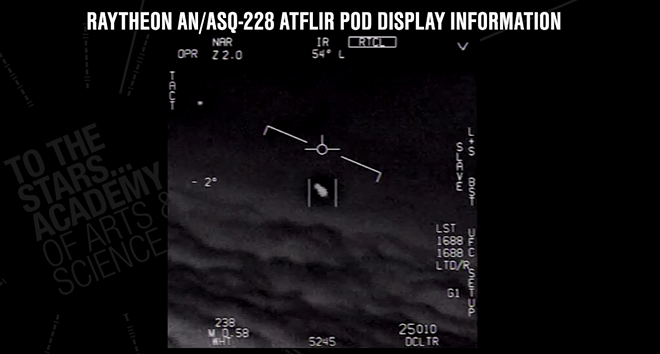 From the summer of 2014 to March 2015, five U.S. military pilots claimed to have seen strange, unidentified flying objects in the sky between Florida and Virginia's airspace, the New York Times reported over the weekend.

Sightings of the mysterious objects, which the pilots claimed were moving at hypersonic speeds, included a near-collision between one of the so-called UFOs and a Super Hornet pilot over the ocean in 2015.

In video of that encounter, pilots can be heard shouting in wonder as they question what they're witnessing in the sky.

“What the fuck is that thing?” one of the pilots exclaims in the video.

“Wow, what is that, man?” another pilot asks. “Look at that flying!”

Lt. Danny Accoin, a Super Hornet pilot, interacted with one of the objects twice on his radar, picking up small objects 30,000 feet in the air, but could not get a clear view of it on his helmet camera, the Times' report notes.


No one in the Defense Department has come forward to identify the objects as extraterrestrial, but the reports have gained the Navy's attention.

According to a report on the Navy's website, Operation Blue Book, which ran from 1947 to 1969 and investigated UFO sightings, of 12,618 sightings during the period, 701 remained "unidentified."

Due to the nature of the incidents, Politico reports, the Navy is working toward a procedure that will make it easier to report unidentified sightings.