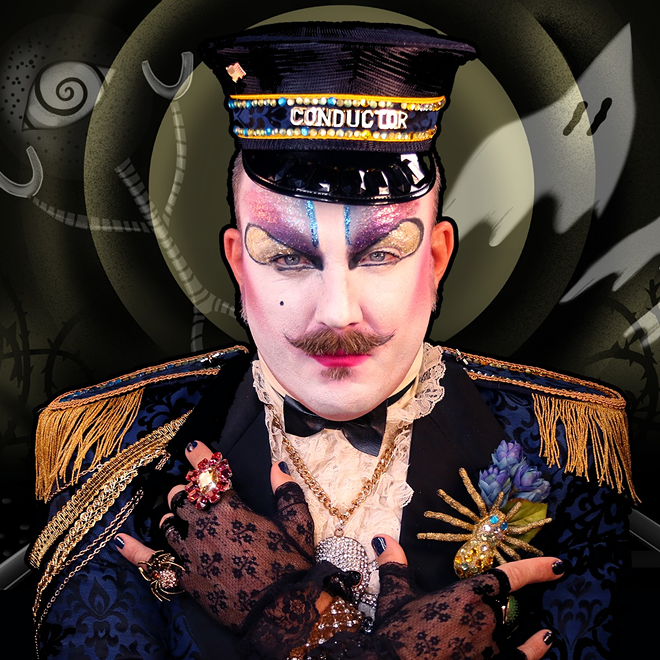 The 2019 Orlando International Fringe Theatre Festival came to a close on Memorial Day, and after seeing 80 different productions – and writing reviews of 50 of them – all I can say is this: The weather was dry and hot, the beer was cold and wet, and the lineup of shows was arguably the strongest in several years. As usual, Orlando Sentinel critic Matt Palm (who wrote even more reviews than I did, although he saw fewer shows) put our heads together for this year’s Critics Choice awards, which were presented Monday night during the festival’s closing ceremonies.

This year, the coveted Best Show award went to Dandy Darkly’s All Aboard!, which I called “an express ride into the dark heart of gothic Georgia, where long-buried ghosts are still as close as the local superstore … Grotesque, profane, profound and laugh-out-loud funny, Dandy Darkly’s All Aboard is exactly the kind of one-of-a-kind experience Fringe was invented for.”

Here are the remainder of the 2019 Orlando Fringe Critics Choice awards:

BEST PLAY, COMEDY
Driving Miss Cherry Blossom
Eric Pinder and Karen Amano made a welcome return to the Fringe with this hilarious yet heartfelt tale of cross-cultural communication. Amano’s multiple characters – including a memorable monkey – made this a must-see.

BEST PLAY, DRAMA
girl.
Longtime local producer-director Beth Marshall’s most difficult – and most necessary – play yet featured three extraordinary young actresses; in particular, Rachel Comeau blew me away with her complete commitment to emotionally excavating every last ounce of anguish and uplift from her character’s arduous ordeal.

BEST PLAY, MUSICAL
6 of VIII: The Six Wives of Henry VIII
Samantha Barnes Daniel wrote a sensitive book to accompany Libby Larsen’s short song-cycle about King Henry VIII's ill-fated spouses; with the soaring operatic voices of members of the Helena Collective, they created a hauntingly beautiful experience unlike anything else at the Fringe.

BEST SOLO SHOW, DRAMA
My Left Tit
Brandon Roberts applied his peerless physical theater gifts with a gentle touch, sharing his late friend Gwen Edward’s wisdom about living bravely with cancer and letting go. A show that evoked a Pixar-like reaction of whimsical weeping, with many a tear guaranteed to be jerked.

BEST SOLO SHOW, MUSICAL
Ingenue
Writer-performer Melanie Gall brought Deanna Durbin – who was a world-wide sensation during the Great Depression and World War II before disappearing into blissful obscurity – back into the public consciousness with a marvelous musical play that left me wanting to learn more about Durbin’s amazing life, and hear more of Gall’s equally amazing voice.

BEST DANCE SHOW
Does That Make Sense?
Darci Ricciardi and Sarah Fanok set a high future bar for themselves with their first self-produced Fringe production by blending balletic movement and Beatles music with a brutal – though ultimately uplifting – story line involving sexual abuse, a theme shared by many shows at this Fringe.

BEST FAMILY SHOW
JunNk
This high-energy quartet of comic percussionists brings to mind Stomp, Blast and the Blue Man Group, but they’ve got a goofy flair all their own. Like an all-ages theme park production that you don’t need a $100+ ticket to enjoy.

BEST ORIGINAL SCORE
Fury in Sound
A fantastically inventive mini-opera from local director Scott Browning and international composer Nathan Felix, featuring a goosebump-raising score that offers an eerie idea of what it might sound like if the composers of Les Miz wrote a musical version of The Exorcist.

BEST MALE PERFORMANCE
Paris Crayton III, Spare the Rod
Crayton bared all onstage – literally and emotionally – in his unsparing autobiographical account of abuse. The electricity of his performance makes his story exceptional, especially the breathless delivery of dense beats in the songs and spoken-word poetry that breaks up his monologue.

Finally, while we didn’t award them Critics Choice prizes, I’d like to give a couple of special nods to the students of Trinity Prep (especially leading actor Josh Lefkowitz), whose condensed staging of The Curious Incident of the Dog in the Night-Time improved on the professional tour in important ways; as well as performer Summer Mormeneo and VFX artist Ricky Johnson, whose La Muñeca Rusa featured the most advanced projection mapping effects I’ve ever seen at Fringe. Look of an expanded version of this visual treat at Immerse in the fall.