Winter Park is many lovely things. But a musical hotbed? Not generally. However, there is something that’s been going on recently that’s more interesting than it might look at first glance. Right under all the bougie noses, local Southern rock icon Thomas Wynn has been doing something novel and organic called “The Circle” at the Winter Park Dexter’s.

Every Tuesday for the past few months, he’s convened a constantly changing roster of top songwriters from all over Central Florida and beyond to join him, each lineup different so far. That sheer infusion alone would be enough to investigate. But the Circle's format itself really ups the freshness even for longtime fans of any given artist.

Yes, the musicians each perform their original songs, which is already worthwhile considering the caliber of talent that Wynn maintains (the roster so far has included notables like the Ludes’ Jeff Nolan, Gailanne Amundsen, Amy Robbins, Lauris Vidal, Beth McKee, Beartoe, and Joseph and Jessy Martens). But that’s not even until the third and final set. What happens before is what makes the Circle a musical experiment. 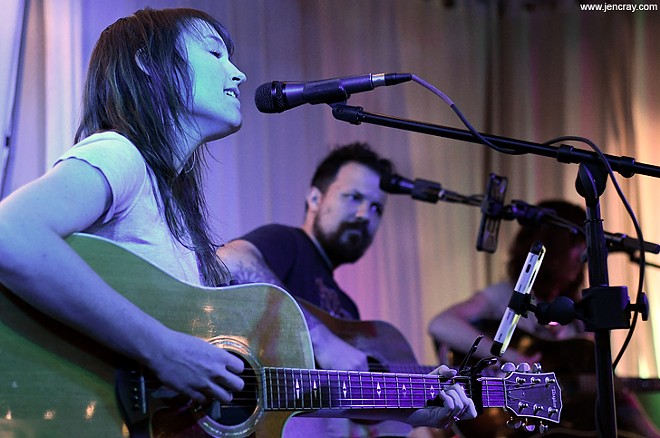 As explained by Wynn at the outset of the evening, the first two sets are played together as a trio. All songs are covers chosen collectively between the featured players and are learned individually. The musicians don’t actually perform the songs as an ensemble until the show. At two sets that total well over a dozen songs, a lot of work goes into each weekly event. But when a format is such that the results will be a surprise even to the artists themselves, you’ve got an interesting live proposition. Be it chemistry or collision, it at least promises adventure.

The special guests of the latest edition were esteemed local Hannah Harber and Midwestern roots rocker Erica Blinn. Although part of the local Wynn musical dynasty as Thomas’ wife, Harber is one of the preeminent young alt-country voices in the area who’s really staking her very own claim now that she’s released her debut album this year (Long Time Coming). And Blinn is an Ohio-raised artist now based in Nashville.

Be it live performer, DJ or your date’s playlist, song selections are glimpses into the soul. With choices from Van Morrison, John Lennon, Simon & Garfunkel and Little Feat, Thomas Wynn showed himself an artist of wide and classic lens. Harber certified her refined Americana sensibilities across selections from Townes Van Zandt, Patty Griffin and Dwight Yoakim. And when she went electric, ripped on the blues harp and did the unthinkable by making a Bob Seger song actually move me, Blinn proved an artist who can bring some surprising gut to even basic material.

With a cooperative and democratic setlist that was wide, deep and personally reflective of the featured players, this night was anything but a soft-core, crowd-pleasing hit parade. As not just spouses but regular musical collaborators, Wynn and Harber played off each other with obvious and natural ease. And Blinn’s harmonica added a nice dimension to the party. With Wynn as the anchor, the whole night rolled on a bedrock of rustic soul that bleeds sweet.

When they finally got into their original work, the locals were predictably good. Wynn delivered a great highlight when he went Orlando deep and dusted off the old Wynn Brothers Band classic “Dirty Ways.”

As for the touring guest, Erica Blinn showed some intriguing live looks. On record, she tends to play like a young Bonnie Raitt, which is fine. But live, at least solo like she was at this show, Blinn was way more rock & roll. Besides being more exciting, that rawness is a more distinctive edge for her and is better suited for her lyrical toughness. This is one artist who does much more with less.

Further authenticating the affair as an artist spotlight, Wynn has each guest talk about some of their personal musical history throughout the night. It’s a feature that befits an event that’s really much more than basic background music at a restaurant. Besides being an extensive and well-curated showcase of musical talent from the broader area, the Circle is a performance exercise that’s designed to entertain on a high wire.

The Circle is every Tuesday at the Winter Park Dexter’s. There’s no cover and the first set starts at the very inclusive time of 7:00 pm, so no school or work excuses. Upcoming guests include Tommy Shugart and Steven Cardwell (June 4), Cat Ridgeway and Sean Holcomb (June 11), Damon Fowler and Jordan Foley (June 18), and Lynne Gibson and Jordan Schneider (June 25). Go see some area pros live on the edge a little.