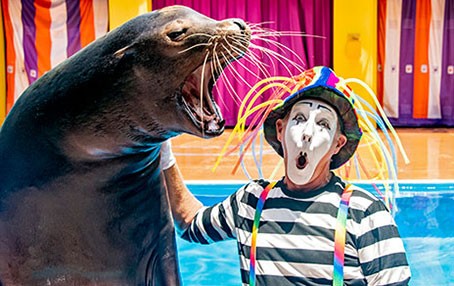 With Memorial Day now past and the mercury hitting 100 degrees, true summer is finally upon us. And across Central Florida’s theme parks, summer means more than just crowds of tourists who have yet to discover sunscreen.

SeaWorld Orlando's Electric Ocean festival returns for a third year. The event takes place on select nights through Labor Day weekend, and includes special shows, dance parties, and an impressive end-of-the-night spectacular. Sea Lions Tonight, the family-friendly Bill and Ted style show, has a mix of pop culture and SeaWorld-specific humor along with some laughs from the iconic SeaWorld mimes. The more serious dolphin and orca shows include upbeat music and a conservation message.

Sadly, POP by Bubble Legendary won’t be returning this year. Instead, the Nautilus Theater will be home to a chill-out lounge with a bar serving frozen drinks. Club Sea Glow returns with its impressive costumed characters. Each evening of Electric Ocean closes out with a 9:30 p.m. showing of Ignite, SeaWorld’s nighttime show that includes flame throwers, lasers, fireworks, and water fountains all set to an original soundtrack by Grammy award-winning record producer Dan Rudin.

Beyond the summer festivities, Sesame Street is the big focus at SeaWorld Orlando with large crowds still regularly filling the land, home to SeaWorld Orlando’s very first parade. Across the street at Aquatica, KareKare Curl, which opened last month, is the big draw.

Up the street at Universal Orlando, the Summer Concert Series won’t be returning this year. A new coaster featuring Hagrid and animals from the Potter series will open next week at Islands of Adventure. The Nighttime Lights at Hogwarts Castle return for the summer, and Universal Studios’ Cinematic Celebration will run most nights throughout the summer.

With Star Wars opening at Hollywood Studios in August, Walt Disney World won’t need much of a push to bring in tourists this summer. Typhoon Lagoon will host the H2O Glow Nights on 25 select nights throughout the summer. The special ticketed event adds character meet-and-greets, DJ hosted dance parties, and unique food and beverage offerings to the tropical-themed water park.

Ahead of Star Wars: Galaxy’s Edge opening at the end of August, Hollywood Studios will host a small Pixar celebration along with other small events to celebrate the park’s 30th anniversary. Mickey & Minnie’s Surprise Celebration at Magic Kingdom Park brings updates to a dance party but not much else. The Animal Kingdom just debuted a new version of Rivers of Light, though reviews are still about as bad as they were before the update. The 25th anniversary of The Lion King is celebrated in the park with new Tree of Life projection shows. Epcot’s old Sounds of Summer concert series won’t be returning; instead, the popular Guardians of the Galaxy – Awesome Mix Live! from last year comes back beginning June 14.

Like most of the area parks, Legoland Florida will have a large-scale fireworks show for the 4th of July, but it will also have some special events on other select weekends throughout the summer with most of the July ones dedicated to The LEGO Movie.

Busch Gardens Tampa will have fireworks every weekend throughout the summer along with dance parties. The main focus at the Tampa park will be on their recently opened launch coaster, Tigris.

The Brevard Zoo plans to keep its cats cool with “Arctic Blast Tuesdays,” where large ice cubes will be added to the Paws On Play Lagoon twice per day. Over at the Central Florida Zoo in Sanford, the free shuttle between the Sanford SunRail station and the zoo returns June 3. At the zoo, Cub Club, an upcharge interactive educational experience for kids, returns throughout the summer. And Gaylord Palms has its SummerFest event that includes a surf show, poolside dance parties, a scavenger hunt, and a unique, indoor nighttime light show. Most of the SummerFest activities are complimentary for overnight resort guests.