Disney responds to rumors that two Epcot pavilions are getting demolished

As Star Wars: Galaxy’s Edge welcomes guests at Disneyland, the nearly identical land at Hollywood Studios wraps up construction ahead of its Aug. 29 grand opening. With that project now almost complete, the focus at Walt Disney World is quickly turning to the updates heading to Epcot.

The multi-year, multi-billion-dollar reimagining of the park is already well underway with new attractions, restaurants or updated films confirmed for nearly every World Showcase pavilion. Two new Future World pavilions, a play-themed one and a Guardians of the Galaxy one, are also already in the

works, as is a space-themed restaurant. A new entrance plaza and an updated "spine" for Future World, where Innoventions is currently located, are also soon to break ground, with construction walls already up in parts of the entrance plaza. But even more changes are in the works.

WDW News Today reported on May 28 that internal documents they’re familiar with call for the demolition of both The Seas and The Land pavilions.

WDW News Today was an early source of previous Epcot rumors that have now been confirmed by the company, but this latest rumor still seems far from confirmed. After the initial report on the WDW News Today site, fans of the two pavilions began asking for an official response from Disney. The outrage over the possibility of two pavilions being completely destroyed grew as time went on. The official WDW twitter account, @WDWToday, responded to one fan stating; “There are big plans for Epcot, Kaz. We do have new pavilions joining, like the play-themed pavilion and the Guardians of the Galaxy-themed roller coaster, but The Land and The Seas with Nemo & Friends are planned to be with us into the future.”

A few hours later, Thomas Smith, the Editorial Content Director of the Disney Parks Blog, posted a detailed blog post regarding the Epcot plans. The blog post confirmed updates to the Innoventions area but also seemed to acknowledge the WDW News Today rumor with a mention of the pavilions in a paragraph about Future World pavilion icons.

“Longtime fans of Epcot are familiar with the pavilion icons, like the ones you see here for Imagination!, The Land and The Seas with Nemo & Friends. With new experiences like the previously announced play-themed pavilion joining these Epcot staples, don’t you think we need some new icons to match? More will be revealed at the [D23] Expo!”


Together these two responses by Disney seem to confirm that the pavilions will be staying. That’s not to say they won’t be receiving major updates. On the WDWMagic forums, both users Magic Feather and Marni1971, who are known for their insider connections, have confirmed significant updates are planned for the two pavilions. 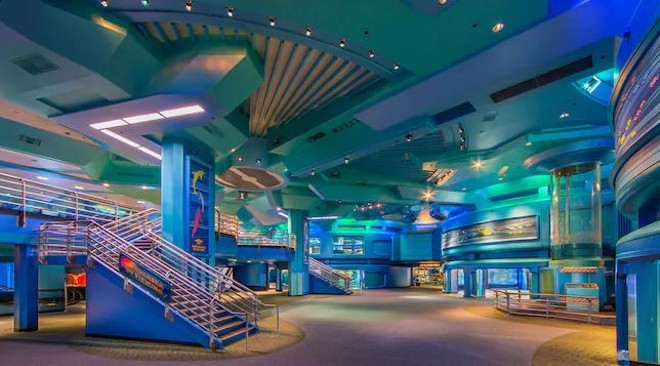 This shouldn’t come as a surprise, as both pavilions have dated ride systems and exhibits that are decades old. Both have received numerous updates over the years, but at their core they are incredibly similar to how they were on their opening day. Rumors of an aquarium at the Animal Kingdom date back to before the park’s opening in 1998. That has never happened. Instead, a Nemo overlay to The Seas was installed, even as the actual aquarium continues to look bland when compared to today’s far more impressive designs. Guest satisfaction surveys in late 2018 asked about The Seas pavilion, indicating that Disney is looking into possible updates regarding the pavilion.

Both of the pavilion updates are part of the third phase of the Epcot overhaul. Phase One, which focused on Future World East and the Ratatouille ride, is now wrapping up. Phase Two, with more focus on World Showcase and the central area of Future World, is now beginning. Phase Three, which will see its own World Showcase updates and the Future World West reimagining, is just now being finalized internally.

Despite the obvious response by Disney both via their official Twitter account and blog, WDW News Today is standing by their reporting regarding the pavilions, stating on Twitter on June 3:

Some clarification: no entity in the Walt Disney Co. above the @WDWToday account has made a statement regarding The Land and The Seas Pavilion. If a rumor is incorrect, we are always contacted by someone actually in the know in their various PR departments. We have received no such correspondence. Our sources are the same as always and our track record speaks for itself (and I mean the actual track record, not some contrived narrative from those who chose to not follow us). Certainly, plans change ahead of Disney executing them from time to time, but as a fan site, we think it’s fun to talk about what’s being planned. I think most people feel the same.


Disney has yet to issue any further response regarding the rumor.