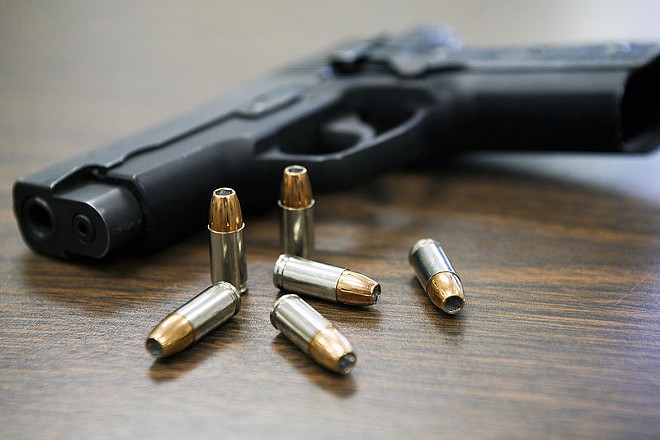 After a state commission found out Wednesday that nearly 200 schools — including many charter schools — have not had armed security as required by state law, commissioners urged the Florida Department of Education to “name names and name people” to try to force compliance.

Within two hours, Education Commissioner Richard Corcoran agreed to publicly name noncompliant school districts at a news conference if they do not comply with all school-safety mandates by Aug. 1.

“His quote was, ‘I will do a press conference and you can stand beside me and we can call out the school districts if they don’t comply,’ ” Polk County Sheriff Grady Judd, a member of the Marjory Stoneman Douglas High School Public Safety Commission, told commissioners after talking on the phone with Corcoran.

“Sounds like a fair resolution, a fair compromise from it,” said Pinellas County Sheriff Bob Gualtieri, the chairman of the commission.

Before speaking with Corcoran by phone, Judd had said, “Let’s name names, and name people and name districts on who the heck doesn’t care to protect children.”

The commission’s outrage about noncompliance was fueled after it learned the results of a survey conducted by the state, in which school districts answered with the promise of anonymity. The survey showed that 10 of Florida’s 67 school districts failed to have full-time guards or law-enforcement officers at every school this year.

In seven of those 10 districts, the lack of armed security has been at charter schools, Office of Safe Schools Director Damien Kelly said. In two of the districts, it has been at a combination of charter and traditional public schools. In one district, it was at a small school program.

Kelly added there are about 190 schools across the state that have not complied with the state mandate.

“Those charter students are human beings, and they are funded through the school board. Why in the world do they have the latitude and the luxury not to comply with the law?” Judd said.

Visibly angry, Judd said it was “nuts” that there are schools that have not met school-safety mandates passed by the Legislature more than a year ago. Max Schachter and Ryan Petty, two commissioners who lost children in the February 2018 mass shooting at Marjory Stoneman Douglas High School in Parkland, agreed with Judd and put pressure on state officials to call out school districts that were not in compliance.

Gualtieri pushed back against districts that say the requirement to have full-time guards or law-enforcement officers at schools is an “unfunded mandate.” He said they can use state money to comply if they participate in a controversial school “guardian” program, which allows school personnel to be armed. During the upcoming 2019-2020 school year, that program will allow classroom teachers to serve as armed guardians. This year, the program was limited to school employees whose main duties are outside the classroom.

The results of the survey also showed that 21 districts have schools that do not conduct active-assailant drills at least one time a month, as required by law. Twenty-seven districts also reported that not every classroom door with a window has an opaque covering, which could be pulled down if a shooting happens.

The survey also noted that seven districts did not have policies or procedures that required all classroom doors be locked when occupied by students.

“I don’t understand the concept of not complying when a law is passed,” Gualtieri said. “We don’t get to pick and choose the laws we follow. If it is in the law, we follow it. I just don’t understand it at all.”