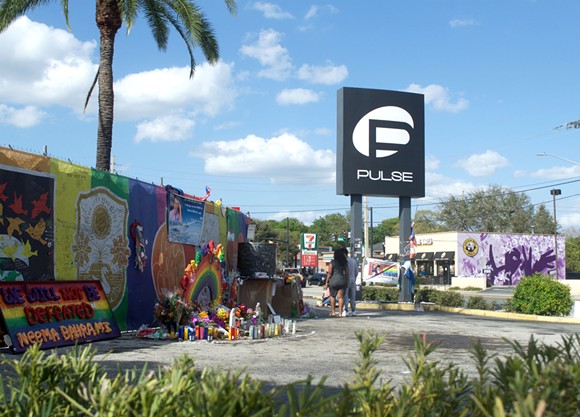 With the third anniversary of the shooting at the gay nightclub Pulse days away, U.S. Reps. Darren Soto, Stephanie Murphy and Val Demings are calling for the building to become a federally recognized national memorial.

Central Florida's congressional trio says they've introduced a bill in the U.S. House calling for federal designation. A companion bill is still required to be filed in the U.S. Senate. It's unclear whether it would meet any resistance.

"The memorial will serve as a reminder of the remarkable way our community came together to heal and overcome hate," says Soto, D-Kissimmee. "We recognize the need to preserve LGBTQ historic sites, because of cases like the Matthew Shepard Memorial which have been deliberately destroyed over time without these protections. Let the Pulse Memorial become a symbol of hope, love and light."

Designating the site as a national memorial would act as a way of honoring the victims' legacies while simultaneously recognizing the positive contributions the LGBTQ community brings to the world, Murphy says.

"The Pulse tragedy shook our community to its core and forever changed us. It's important that we remember the love that the 49 victims and their loved ones brought into this world, which will always be stronger than the hate that stole their lives on that day," says Murphy, D-Winter Park.

The onePULSE Foundation projects it will take $50 million to complete the project, including the memorial's design, construction, maintenance and 49 endowed scholarship funds. The foundation is currently in the process of selecting six teams of architects and artists to complete the memorial and has launched an international design competition to decide on a winner.

The design competition will be conducted in two stages, according to a news release from the onePULSE Foundation. The winning team will be selected by a panel made up of onePULSE stakeholders, local leaders and architects.

The foundation expects to announce a winner in October.

The 30,000-square-foot memorial and museum is expected to open sometime in 2022 and will include public gathering and community spaces. The onePULSE Foundation says it will be free and open to the public year-round, regardless of the time or day.

"A community is not brick and mortar, it is the lives of its people, the dreams of its children and the memory of those we've lost. Our strength flows from those memories, which cement the bonds of our common humanity and unite us in shared history," says Demings, D-Orlando.