Florence + the Machine brought power and pride, love and light to Orlando 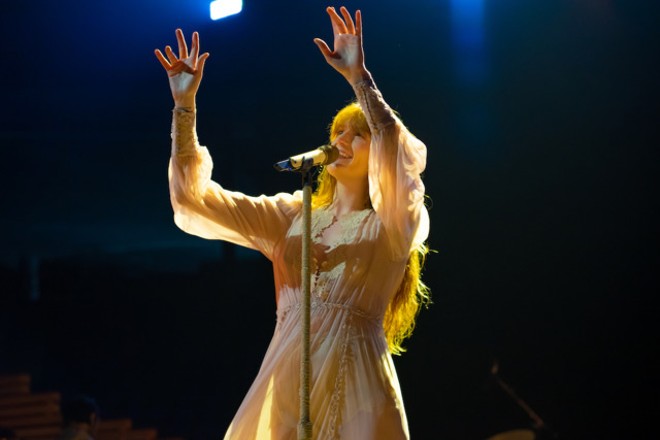 Florence Welch was giggly before she and her band, the Machine, dipped into a Patti Smith-inspired highlight from her 2018 album, High as Hope. The 32-year-old songwriter from South London told Amway Center that she felt like she was surrounded by a lot of kindred spirits.

“I feel very at home, it’s gonna get freaky — I can feel it,” she told the Orlando crowd before pausing to inadvertently let the happiness inside of her emanate onto what looked like at least 12,000-14,000 fans (an official drop count was not made available). Miniature pride flags flickered at the front of the crowd, and Welch — who was draped in a cream-colored gown the flowed the way a moon jelly does in the gentle ocean — explained why American women were an important element of “Patricia.”

“My heart is with you, and you deserve so much better than this,” she said, alluding to the way lawmakers have decided that it’s up to them to tell women what do to do with their bodies. She explained that the ACLU was on site to speak to anyone, including the trans community.

“If you feel helpless or hopeless, they’ll be here all night,” she explained. Welch said that the song was kind of about toxic masculinity, but then she pointed out the obvious.

“It must be said, there is not a lot of toxic masculinity at a Florence + the Machine show. If you are here, you must believe and trust in women,” she exclaimed, smiling. “Sing, and rage with us.”

For nearly two hours, a loud and proud arena did just that.

From the dramatic piano drops of set opener “June” to the anthemic sing-along on “Ship to Wreck,” Welch was a goddess effortlessly bounding, barefoot, to every corner of the monitor-free stage. Her naked toes hung off the front of her perch on “Hunger” and “Moderation,” and her outstretched, flailing arms seemed to not just stir up the eight-piece band’s intoxicating energy, but implant it inside of the fans hanging on Welch’s every last word.

It was hard not to hear her, either.

For the last decade, Welch has famously possessed one of the most rapturous vocals in pop music, and it was on full display on Saturday night. The line “My dear, my darling,” became a pseudo-yodel on “Only If For a Night.” Parts of “The End of Love” evoked the delicate power of Joni Mitchell. Despite her incessant movement (and a lap around the arena during “Delilah”), you could barely see Welch’s belly struggling to breathe as she belted out testimonials (“100 Years”) to the tune of delicate harp and malleted cymbals. Not once did she oversing. On “Dog Days Are Over,” that vocal was ghostly and loud as a siren at the same time.

From onstage, Welch can play an effective camp counselor, or friend, too. During the break on “Dog Days,” she politely asked the crowd to put its phones away before jokingly translating it into the kind of English they speak in the United Kingdom.

“Put your fucking phone away,” Welch said, laughing. What followed was an instruction to “hug the person next to you” and then another to tell a stranger that “you love them.” I hugged the woman next to me, followed Welch’s decree, and that woman told me that she also loved me before admitting that, “I haven’t said that to a man in 47 years.”

It was a powerful moment in a set full of them, and it echoed the personal nature of High as Hope, an album where Welch is more vulnerable than she’s ever been. On Sunday, Welch is closing out the U.S. leg of this tour in Miami, and Orlando was the most appropriate place for this show to happen.

At Amway on Saturday, it was hard not to feel the reverberations from a 2016 shooting that took the lives of 49 people dancing at Pulse nightclub less than two miles away. That hate crime is the largest incident of violence against LGBTQ+ people in the history of the United States. Welch dedicated a cover of Candi Stanton’s mid-’80s hit “You Got the Love” to the City Beautiful’s LGBTQ community. She pulled a rainbow flag from the crowd and spun around the stage with it; the red, orange, yellow, green, blue and purple blended into each other.

“Now and then it seems that life is just too much, but you've got the love I need to see me through,” Welch sang. It was a reassuring sentiment, but also a reminder that outside the Amway’s walls, there was still a world that can be unkind to you based on who you love. In fact, a little bit of toxicity actually did creep into the arena (at least in section 104 where a drunk jerk in a Goonies shirt shot the bird at the stage and delivered unsavory glances at his neighbors during “Cosmic Love”).

During encore closer “Shake It Out,” Welch sang that “It's hard to dance with a devil on your back,” and she’s right. It was disappointing to be reminded that even a Florence + the Machine show will never be a completely safe space. But Welch also sang that age-old adage, “It's always darkest before the dawn.” Science — if you believe it — says that’s true, and one more lyric from “Shake It Out” is a fitting reaction to a world where elected officials, and sometimes our family members, seem to be letting us down in our fights for equal rights.

“So here's to drinks in the dark at the end of my road … I'm ready to suffer and I'm ready to hope,” the song said. It is dark, indeed, but at least it’s Florence Welch stirring those spirits. In this day and age, we’ve got no choice but to gladly drink up and find hope in it, too.

Listen to songs from the setlist on Spotify. See more photos from the show via photos.orlandoweekly.com.