International Drive's Pointe Orlando is getting yet another facelift 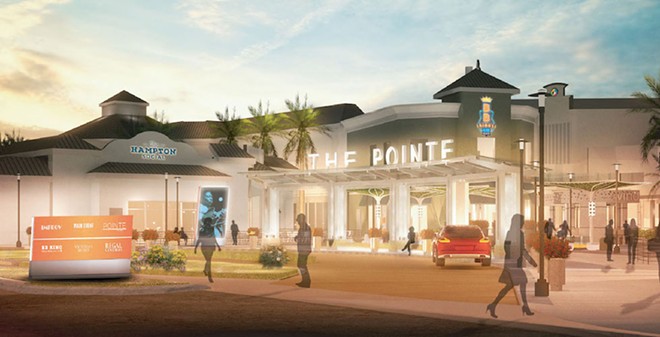 When it opened in 1998, Pointe Orlando was one of the first major retail and restaurant complexes along I-Drive. Just three years after opening, the development saw its first major overhaul. In 2004, the complex suffered a huge blow when FAO Schwarz shut down its iconic store at the corner of the complex. A $10 million remodel at that time saw other early draws like the arcade/nightclub XS Orlando close, making way for more restaurants.

While the complex’s numerous restaurants have remained popular, many of the retail storefronts have sat empty for years. An update that involved tearing down parts of the complex to better open it to International Drive helped add more restaurant spaces but seemed to do little for the retail, especially along the cavernous back side of the complex. A Main Event entertainment center opened in 2016, filling a large section of the back corridor. Beyond the restaurants, just a few original tenants remain, most notably the movie theater and the WonderWorks, which sits across the main vehicular entrance from the rest of the complex.

Now the complex is about to undergo yet another remodel. The $32 million redevelopment will update the two large spaces near I-Drive that previous remodels added, but the most important section seems to be a new corridor called ‘The Link’ that will add a direct passageway from one of the I-Drive-fronted courtyards, near Blue Martini, to the rear of the complex, near where Main Event is. The Link will activate previously underused retail, office, and service corridors via a “visually captivating pathway” with artistic flooring, unique lighting and new retail spaces. A new escalator near Blue Martini will allow for easier access to the second-floor area next to Taverna Opa.

A pond area near the existing Capital Grille, which itself replaced a giant Raggedy Ann doll statue that sat in front of the FAO Schwarz, will be replaced by a new seating area with outdoor bars similar to the ones in the area now. Modern shade structures and lighting will also fill the space.

Like previous remodels, much of the current focus seems to be enhancing the experience for potential diners at the cost of retail space.

“Given the center’s proximity to the second largest convention center in the country and more than 46,000 hotel rooms, we are very cognizant of our responsibility to create a dynamic, memorable experience of Orlando that can be enjoyed by local residents, leisure travelers and conventioneers,” says Chris Ralph, vice president of leasing with Brixmor Property Group, in a press release. “Pointe Orlando already generates some of the highest restaurant sales in the country, and this redevelopment will upgrade the center’s appearance and guest experience benefitting Orlando's premier dining and entertainment destination.”

Along either side of the complex on I-Drive will be modern sculptures with new signage. Sidewalks throughout the complex will have their red pavers replaced with new durable concrete with a swirl pattern. New wayfinding signage, updated storefronts, upgraded landscaping and “dramatic lighting” will also all be included in the yearlong renovation.

Pointe Orlando will remain open during the remodel, with construction activity scheduled with the convention center’s calendar in mind to minimize any impact to guests and tenants. The remodel will be finished in the winter of 2020. 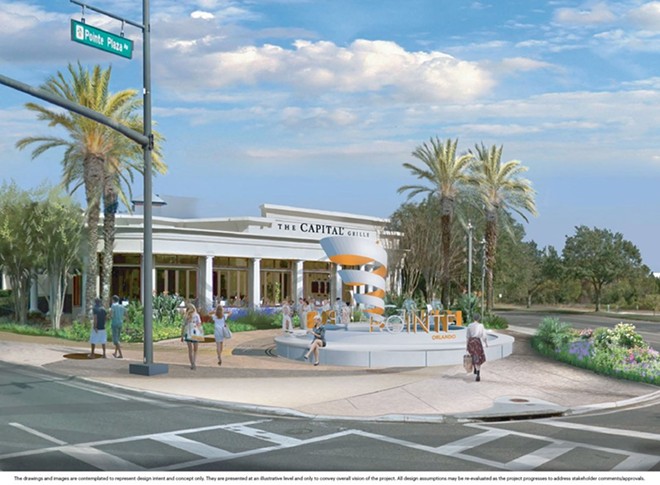