No smoking. No homophobes. No racists. No live music.

The new Wally's Mills Avenue Liquors will have rules when it opens to the public June 17 at 6 p.m., and these rules are not meant to be broken.

Well, maybe the live music rule, but that won't be anytime soon.

We got some looks at the refresh of the six-decades-old lair of crapulence and, I have to say, it's no longer a "dive bar," but it's got a divey swank to it.

"If the Guesthouse and Will's Pub had a baby," says Wally's marketing director Jordan Eichenblatt, "it would be the new Wally's."

And that baby would be a raging alcoholic.

New owner Minesh Patel wanted to open up the space as part of the extensive renovations, and designer Reid Pasternack did just that.

If you're thinking you can purchase liquor at the store and drink it at the bar, you best take those lushy thoughts elsewhere. And, no, Wally's will not open in the morning.

Yes, the ashes of original owner Walter "Wally" Updike sit in an urn on a shelf, and some of that infamous softcore wallpaper was salvaged and restored and now appears above the photo-filled wall of memorabilia.

But my favorite piece in the joint has to be the matchbook condom dispensers, which were unhinged from the men's bathroom and placed in the lounge as (prophylactic-free) art. 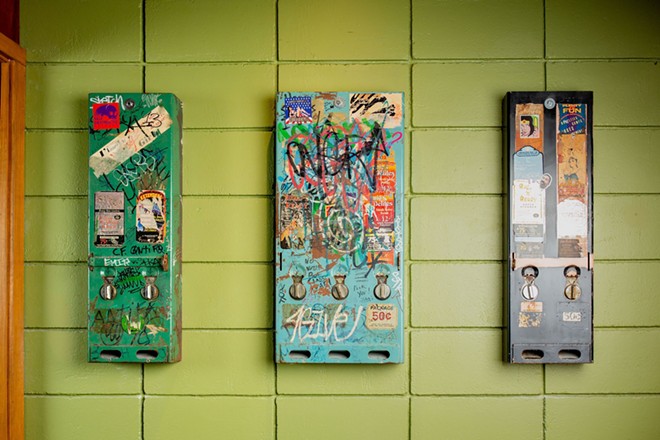 The jukebox is no more, but another important vestige from the old days will return: Cindy Melchor, a bartender at Wally's for more than 20 years, will return to pour stiff Jack and Cokes, PBR and Jameson and Wally's Doubles.