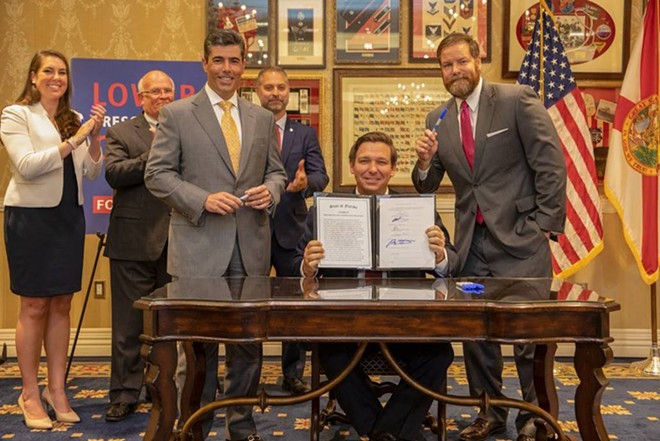 Gov. Ron DeSantis, acting on one of his top priorities during his first year in office, signed into law Tuesday a measure that gives the state the go-ahead to pursue approval to import prescription drugs from Canada and other countries.

But the Republican governor acknowledged at a bill-signing ceremony that the program won’t be up and running any time soon because of a requirement that it receive approval from federal authorities, including U.S. Health and Human Services Secretary Alex Azar.

“We are already working directly with Health and Human Services at the federal level, and I’m going to be talking with the president next week maybe more about it,” DeSantis said. “We envision maybe this taking till next year for us to do it.”

DeSantis, who won the governor’s race with the support of President Donald Trump, has insisted his close relationship would help win over skeptical federal officials who have refused to endorse similar proposals from other states.

U.S. Rep. Donna Shalala, a Miami-Dade County Democrat and a former Health and Human Services secretary, said the plan was the “silliest thing I have ever heard of” and called it “pure politics.”

She also predicted it wouldn’t be approved.

“No Health and Human Services secretary has ever approved the importation of drugs because of safety,” Shalala, who led the agency under President Bill Clinton, told reporters at the Florida Democratic Party’s annual Leadership Blue event in Orlando.

The new law would allow Florida to establish Canadian and international drug-importation programs. The Canadian program would be under the auspices of the state Agency for Health Care Administration and would be focused on importing drugs for programs such as Medicaid, the Department of Corrections and county health departments.

The Agency for Health Care Administration would be required to submit what is known as a “waiver” request to the federal government to move ahead with the program no later than July 2020.

The second program, an international drug importation program, would be geared to the broader state population and would be established under the Department of Business and Professional Regulation.

DeSantis signed the bill into law Tuesday at The Villages, a sprawling retirement community in Central Florida. The Villages also was the site of a news conference that DeSantis held to announce his initial proposal.

At both events, DeSantis was joined by House Speaker Jose Oliva, a Miami Lakes Republican who was a key player in passing the bill. Oliva praised DeSantis for supporting the measure despite tremendous lobbying efforts by “big pharma,” which Oliva called the “greatest force in America.”

“The governor never flinched once. Everyone lobbied up,” Oliva told the crowd. “Tallahassee was inundated with special interests. Not once did he shake. And we were able to get this bill done.”

While efforts to kill the legislation in Florida were unsuccessful, pharmaceutical interests have vowed to lobby against the plan in Washington, D.C.

Shalala, however, said it wasn’t just about getting the federal government to agree to the plan. Canada also would have to agree to work with Florida, and the chances of that happening, Shalala said, are nil.

Canada negotiates with drug companies to cover costs of medicines for Canadians only.

While Shalala’s criticisms were made at a Democratic Party event, the plan also has been criticized by conservatives.

The plan was also criticized by Grover Norquist, the founder and president of Americans for Tax Reform who said the plan, if approved, would “import socialism.”