Months after internal documents leaked out with details of SeaWorld Orlando’s 2020 plans, the park has now officially confirmed that a new coaster is in the lineup for next year.

A 24-second-long video was recently uploaded to the SeaWorld YouTube account unannounced; the description for the video uses the hashtag #BreakTheIce. It begins with a sweeping drone-like shot of what looks to be Arctic landscape. The camera teeters on the edge of a cliff, then tilts over it before the screen goes black and the words “plunging thrills” appears. The camera then seems to fall off the cliff, there's what sounds like a hawk screeching, and again the screen goes black and “predatory heights” appears on the screen. The video closes with the SeaWorld Orlando logo, the words “New coaster takes flight” and the year 2020.

The Arctic theme of the video seems to confirm the previous rumor of a new coaster being located near Wild Arctic. Wild Arctic itself is rumored to be getting a major overhaul that will include a replacement to the dated motion theater. This short, cryptic video gives little to no detail on the new coaster, but recently uncovered documents provide some insight. In the documents, the outdoor covered dining at Mango Joe’s looks like it's being repurposed as part of the new ride’s queue.

On the leaked slide deck last year, it seemed that SeaWorld Orlando would add a family coaster similar to Wave Breaker at SeaWorld San Antonio. That jet ski-themed coaster is similar to the new motorcycle-style coasters coming to both Islands of Adventure and the Magic Kingdom. 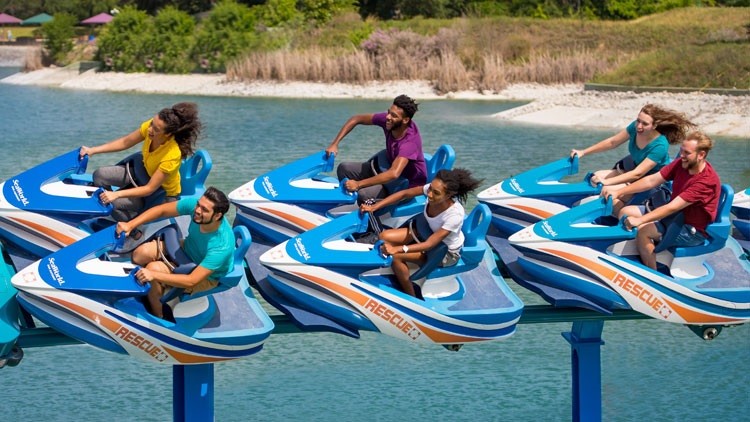 But the television show that ride is based on is now canceled and while the ride is a favorite in San Antonio, the idea of going up against a Hagrid coater and a Tron coaster seems to have been enough for SeaWorld to back away from that plan.

Many coaster fan sites began speculating that the new ride might be a dive coaster like Busch Gardens’ Sheikra or a wing coaster like Cedar Point’s Gatekeeper. That doesn’t seem to be the case. A more traditional coaster looks to be in the works. Both The Coaster Kings and local theme park vlogger Midway Mayhem are reporting that it will be a multi-launch switch track coaster.

Using documents filed with Orange County, both sites have shown similar track layouts. After loading, the coaster track would slide to the right. A launch similar to that of the recent Tigris coaster at Busch Gardens would push the coaster vehicle backward toward a vertical spike near Shamu Stadium and forward. After multiple backward and forward launches, the coaster will gain enough speed to push it over a very steep hill, known as a top-hat element. This cliffhanger-style top hat would address both the “plunging thrills” and the “predatory heights” teased in the video. The coaster would then hop over the walkway between Bayside Stadium and Wild Arctic before entering an area that is currently backstage where riders will encounter some twists and small hills. A final hop over the pathway will bring the coaster back to the lakeshore, where it will circle around the launch area and enter into the station with a total ride time of just under two minutes.

The top hat element is an interesting choice considering Universal is rumored to have one on their new, yet to be announced Jurassic World themed coaster at Islands of Adventure. But the location along the lakefront means that this new coaster will be seen from both the park’s sign on Central Florida Parkway and from across the lake along the Waterfront area. While most of the park’s coaster thrills are hidden from view within the park, this ride will show off its most prominent elements for all guests to see.

SeaWorld Orlando has slowly been working clockwise around their lake with new additions. First with Mako, then Infinity Falls, then Sesame Street this year, and now the yet to be named new coaster next year. The area and the teaser video both point to SeaWorld expanding the arctic theming beyond Wild Arctic itself. Previous rumors of an update to Wild Arctic still seems in the cards later on, possibly with certain animals within the attraction being replaced by smaller, more active ones. SeaWorld has yet to confirm or deny the rumored flying theater that might be coming to Wild Arctic in the early 2020s. An expansion of the extremely popular Sesame Street area is also rumored to be taking place within the next few years.

Premier Rides, who did Tigris at Busch Gardens Tampa and Revenge of the Mummy at Universal Studios Florida, or Intamin, who did SeaWorld’s Infinity Falls and Busch Gardens Tampa’s Falcons Fury, are rumored to the be the manufacturer of the new attraction, with Premier seeming to be the more likely to the two. Both companies specialize in launched coasters.
Site prep has begun around the area with work walls recently going up, more substantial construction expected by late summer. The new coaster will open next year.