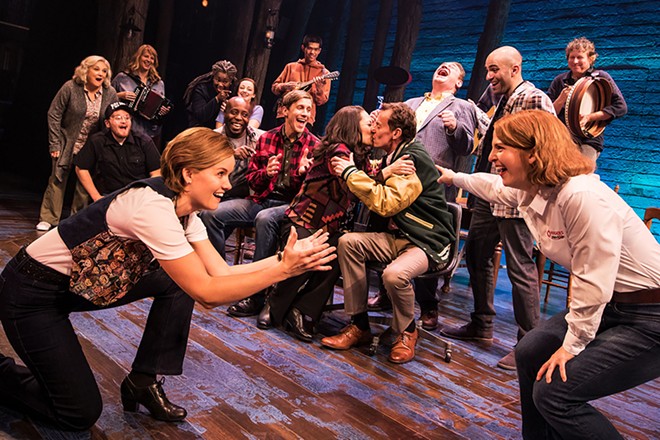 When the megahit musical Hamilton hit Orlando’s Dr. Phillips Center for the Performing Arts early this year, it seemed a safe bet that it would be the highlight of the current Fairwinds touring season. And while Lin-Manuel’s larger-than-life, all-American epic absolutely lived up to all its hype, I have to admit that an intimate one-act set on an obscure Canadian island ended up being my favorite entry in the 2018/2019 Broadway series. Even more unexpectedly, Come From Away (which runs through June 16) takes the aftermath of the Sept. 11 terrorist attacks and transforms that tragedy into some of the most joyful, life-affirming moments I’ve ever experienced in a theater.

Authors Irene Sankoff and David Hein took true stories from Gander, Newfoundland – a remote town where 7,000 international air travelers were stranded for days while U.S. airspace was closed after the 9/11 terrorist attacks – and wove the tales of sorrow and triumph into a rich tapestry of human connection. The details of how the “plane people” were isolated for endless hours inside aluminum tubes, unaware of what had occurred in New York, are chilling; but even more engaging are the examples of how a tiny town rallied together to show hospitality towards strangers, cementing cross-cultural connections that are still strong nearly two decades later.

Come From Away’s Celtic rock score makes an invigorating alternative to the familiar pop-pastiche; fans of Epcot’s old Off Kilter will feel right at home, and the onstage band will have you clapping along straight through the raucous curtain call. The dozen-strong ensemble, each of whom plays multiple parts, is so consistently strong that it’s almost impossible to single anyone out, but Becky Gulsvig reaches the stratosphere singing “Me and the Sky” as Beverly Bass, the first female American Airlines captain, while Chamblee Ferguson and Christine Toy Johnson’s romantic subplot provides a ray of sunshine in the gloom, as do Kevin Carolan and James Earl Jones II’s hilarious line readings.

This might be the most tightly paced production I’ve seen all decade, and the only possible critique I can levy is that it never pauses long enough to let the audience applaud (or even breathe) between songs. It isn’t often that a show overwhelms me on both an aesthetic and emotional level, but Come From Away left me stunned and sniffling for most of my Lyft home.

The Gist Broadway Come From Away Orlando theater theater review