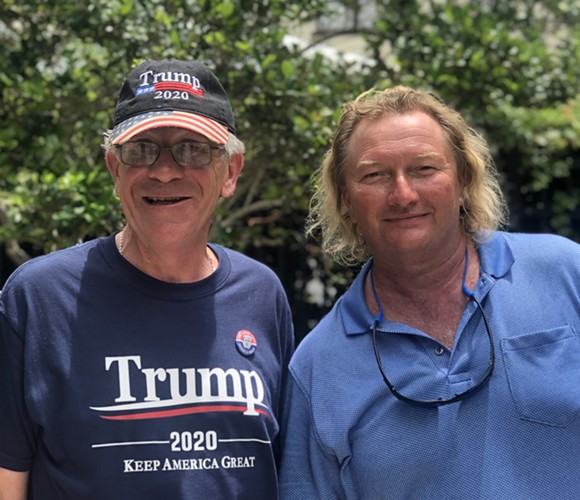 Prepped with canopies, tents and coolers for Florida's June heat, a couple dozen of President Donald Trump's most loyal supporters are already lined up near Amway Arena to hear him announce his 2020 re-election on Tuesday.

In the face of what is expected to be a significant protest on Tuesday, Beck isn't worried about how others view supporters of the President like himself.

"We're tolerant in whether they [believe in the president] or not," Beck said. "But we can be pushed too far."

One or two more people joined the line on Division Avenue every 15 minutes or so as we spoke. Some motorists slowed down to either praise them and the President, or shout obscenities.

Many of the supporters brought blankets and coolers to make the wait a little more comfortable. Nearly all of them wore some kind of Trump T-shirt or hat. One man near the front of the line, with a red "Trump 2020" sign on his bicycle, wore a black "Space Force" ballcap.

"I basically agree 100 percent with everything that [President Trump] does, even the tweets – that's a big thing people disagree with," says Gary Rout of DeBary, Florida, one of the only young people in line, while under the shade in a lawn chair. "He's a person like us and I love that he just comes out and acts like a regular human being and not a politician."

What also appealed to those gathered to see the president wasn't only his politics, but the sense of community that comes with meeting fellow supporters. Many carpooled together to Orlando from different parts of the state, and some were with friends they'd met at previous Trump rallies.

The President's visit to Orlando comes at a time when he needs to begin energizing those that voted for him in 2016 and attract those on the fence about 2020. A recent Fox News report noted that the President is losing in a hypothetical general election to potential Democratic challengers Vice President Joe Biden, Sen. Bernie Sanders, Sen. Elizabeth Warren, Sen. Kamala Harris and Mayor Pete Buttigieg.

The Democratic Party isn't going to forget Florida, either. Their first two debates of the 2020 primary will take place on June 26 and June 27 in Miami.