Trump chose Pride month to announce his re-election. Here's a list of local LGBTQ-owned businesses and artists you can support instead

As you already know unless you live in a cave without wi-fi, 0n June 18 President Donald Trump announced that he is running for re-election at the Amway Center.

This is national Pride month, and the anniversary of the Pulse nightclub shooting, where 49 were shot to death, was just last week.

The President’s cabinet has been accused of violating the rights of LGBTQ people many times since Trump took office. Just recently, the administration released a healthcare proposal that basically would let healthcare providers discriminate against trans people.

In honor of Trump's visit during Pride month, we've gathered a list of LGBTQ-owned businesses and artists you can support instead of attending the rally.

Hank’s Bar has been part of the Orlando LGBTQ community since 1987. Hank’s is free of charge to enter, and they serve beer and wine. The bar tells us it’s "a very casual place," and some of its reviews on Facebook mention that Hank's has the "coldest beers in town." They also host pool tournaments every Tuesday. Hank's is located at 5026 Edgewater Drive. Follow their Facebook here for all their events throughout the month, or check out their website for more updates.

Barcodes, owned by David Schnyer and his husband, Raymond, is located at 4453 Edgewater Drive. It’s a beer and wine bar, with an attached gift store. At Barcodes, Schnyer says, everyone is welcome, regardless of political affiliation. He tells us that even on the night of the election, they didn’t have their TVs turned on to watch the results. The gift store, opened in 2010, sells Andrew Christian underwear as well as bathing suits and other items. “It’s just a little sideline that was greeted very well in the community,” Schnyer says. You can follow their Facebook for more information.

“Everyone is always welcome at Stonewall,” the Stonewall Bar says. “We are a center for love and inclusion, no matter political, social, religious or sexual preferences.”

Stonewall, which is located at 741 W. Church St., started as a wine and beer bar. "With visions from our owner Steven, Stonewall was transformed into the two-floor facility that stands today. Inside our innovative facility are a Sky Bar, Video Bar, and Meat Market Patio," the bar told us via facebook chat. "We stayed true to the LGBTQ+ community and renovated our bar to provide a platform for every scene to be accepted and feel welcomed."

The bar will host the “Win With Love rally” on June 18. “On this the 50th Anniversary of the Stonewall Riots. The birth of the Gay Liberation movement. In combination with the recent three-year anniversary of the Pulse tragedy. We cannot stand idly by, but instead will do all we can to promote the concept that hate, division, corruption, and greed have no place in our city, state, or country.” You can follow their Facebook for event updates or their website.

Go get something sweet

CayCakes Bakery: Cayden Cohen said that he started this business because his “job was terrible.” Baking, according to Cohen, started as a mild interest and which soon became an “obsession.” Later, CayCakes Bakery was founded. CayCakes calls itself a “plant-based bakery” and sells to various locations, including Pom Pom's Teahouse (67 N. Bumby Ave.), Dandelion Community Café (618 N. Thornton Ave.), Axum Coffee (146 W. Plant St., Winter Garden), Pig Floyd's (multiple locations), Zanzibar Coffee (315 N. Ronald Reagan Blvd.) and the Orlando Cat Café (532 Cagan Park Ave., Clermont). One of CayCakes' best-selling items is their pop tarts. Cohen says in honor of Pride month, which is near and dear to their hearts, the bakery does a special rainbow pop tart.

Edward’s Gourmet Confections: Edward Neal-Paci is a home baker located in the Orlando area. “It is my intention to make everyone feel this kind of love and acceptance, one slice of cake at a time,” he says. Orlando is an important place to Neal-Paci because “as a young gay man first coming out, I found refuge and friendships at the GLBT Center of Orlando, where I spent time in their library reading stories of courage and success by some of our early gay, lesbian, and transgender pioneers,” he said. “This gave me hope that one day I would be able to help others navigate safely through the journey of coming out and living a healthy and productive life.”

You can order cakes from Neal-Paci via his company’s Facebook page. 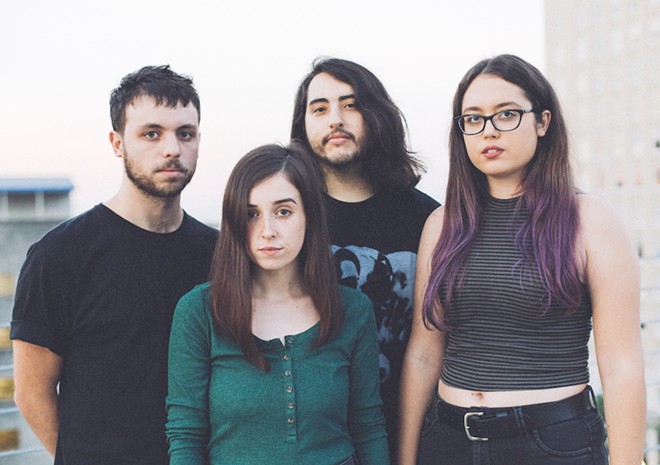 Listen to a local band

Boston Marriage was once named Orlando Weekly’s band of the week. Melissa Pereira, guitarist and vocalist for the band, says LGBTQ rights are important to the band “because LGBTQ+ rights are a matter of life and death. There are people in our community who suffer much greater hardships than us, so being vocal and fighting for all of us can't stop until all of us have equal rights.” Currently, Boston Marriage have one EP out and two singles on Spotify.

Jack Young of local band ReallyFastHorses says “LGBTQ+ rights always seemed like common sense and such a non-issue that it tends to frustrate me when someone’s just not on board with just facts and nature. It’s blatant and deliberately ignorant.” Young says LGBTQ rights are important to the band “because LGBTQ+ rights are a matter of life and death. There are people in our community who suffer much greater hardships than us, so being vocal and fighting for all of us can't stop until all of us have equal rights.” He adds, “In short, I want this band to help my friends, and my friends happen to be really, really gay, so I am really, really supportive of them.”

You can buy ReallyFastHorses' music on their BandCamp or stream them on Spotify. You can follow their Facebook for more updates.

According to their BandCamp, X Dirty Fingers is an “angry queer communist folk” project by TC Kody, who identifies as nonbinary and bisexual. While Kody is currently taking a break from music due to hand surgery, they also produce artwork, zines, and poetry. The zines will be produced by Ghost City Press and available on their website. You can download X Dirty Fingers’ music for free on BandCamp, but Kody urges, instead of giving them money, “it is even better to donate to Black & Pink or GLAAD, which both provide support to LGBTQ+ prisoners.”

Tahnee Reed started her Orlando clothing company, Shredded Dreams, and met her now-fiancée, Kate Warner, through the business. Reed, originally from Nebraska, moved to Florida to build Shredded Dreams with Warner. “We want to be a positive influence on others in the LGBTQ community and be here for others that feel alienated by their families or feel alone in their struggle to find their identity,” Reed says.

The company sells reworked vintage clothing with various music and punk elements. You can find their clothes on their Etsy shop or in the Thirty Six Black tattoo studio, where Reed is an apprentice.