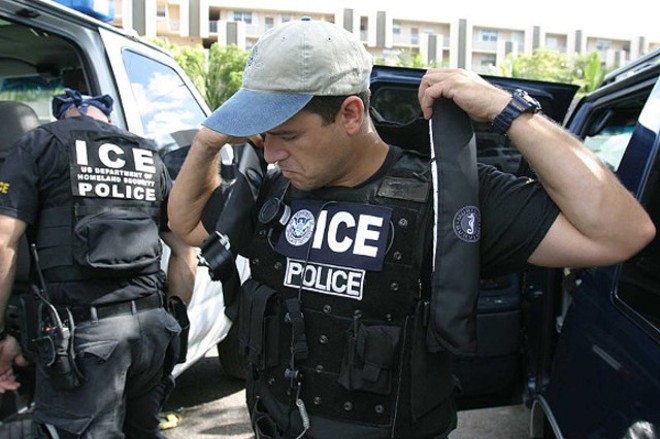 On Monday evening, President Donald Trump tweeted that starting next week, the U.S. Immigration and Customs Enforcement agency would conduct mass arrests with the hopes of deporting "millions" of migrants out of the country.

"Next week, ICE will begin the process of removing the millions of illegal aliens who have illicitly found their way into the United States," Trump said on Twitter. "They will be removed as fast as they come in."

Next week ICE will begin the process of removing the millions of illegal aliens who have illicitly found their way into the United States. They will be removed as fast as they come in. Mexico, using their strong immigration laws, is doing a very good job of stopping people.......


As with many things Trump tweets, no one really knows exactly what he’s talking about.

At the moment it is unclear how ICE could possibly deport "millions" of people, especially since such an operation would require thousands of agents, and most importantly, ICE doesn’t usually telegraph raids of this nature. A spokesperson for the agency even told the Washington Post on Monday that they were not aware of any plans regarding mass round-ups of millions of immigrants.

But calls for large-scale deportations aren't anything new for this presidency. Following the Trump administration’s failed family separation policy, which has resulted in thousands of children ripped from their parents and left in inhumane conditions, previous plans to execute a similar round-up were shut down by then-Department of Homeland Security Secretary Kirstjen Nielsen and former acting ICE Director Ronald Vitiello, mostly out of fear of widespread backlash, says the Post.

However, current ICE acting director Mark Morgan has vowed to crack down on immigrants living in the U.S. "illegally." “Our next challenge is going to be interior enforcement,” Morgan told reporters on June 4, adding that this new initiative would also include families.

This is especially concerning for states like Florida, where the entire state falls into the government’s 100-mile “border zone.”

Though the Fourth Amendment protects citizens from random and arbitrary stops and searches, this courtesy is not extended to Americans living in this zone, which actually covers 200 million U.S. residents, or two-thirds of the total population.

Within these 100-mile zones, agents are not required to obtain a warrant or even operate under suspicion of wrongdoing to justify a “routine search,” but that doesn’t mean their methods are constitutionally exempt. ICE agents and participating law enforcement are not allowed to pull someone over without “reasonable suspicion” of an immigration violation or crime, and they most definitely cannot search a vehicle without a warrant or “probable cause.”

With this in mind, here’s what to do if you’re stopped by federal agents, even if you’re undocumented, according to the ACLU of Florida:


— “I am not required to answer your questions about my immigration status and do not wish to do so.” (If you have valid immigration papers at the time, you should provide them. However, never provide fake documents if that’s what you have at your disposal, says the ACLU.)

— “I do not consent to a search of my belongings.”

— At any point, even while detained, you can say, “I wish to remain silent.”

You also have the right to:

— Tell others they have rights and should use them, but do not block officers from performing their duties