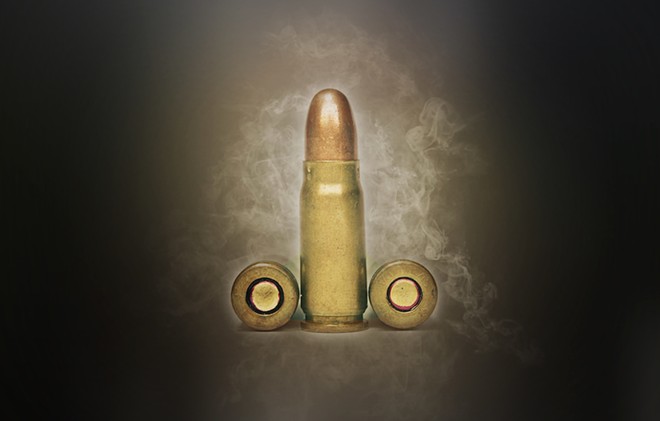 Days after her estranged husband was arrested for trying to run her over with a car, a Florida woman is now facing felony burglary charges because she turned his firearms over to law enforcement.

According to the arrest affidavit, 32-year-old Courtney Irby was arrested June 15 and charged with armed burglary of a dwelling and grand theft of a firearm after she entered the apartment of her husband, Joseph Irby, gathered his guns and turned them in to the Lakeland Police Department.

The guns were previously ordered by a judge to be turned in, but when Courtney Irby dropped them off at the jail, an officer told her she was breaking the law.

“So are you telling me that you committed an armed burglary?” asked the officer. Irby answered, “Yes, I am, but he wasn’t going to turn them in, so I am doing it,” reports the Lakeland Ledger.

Irby had already applied for a temporary injunction against her husband and the two were in the process of a divorce, according to court records.

“She was actively protecting herself and her family from an estranged husband who had not turned over his firearms to law enforcement, and was arrested for it,” said State Rep. Anna Eskamani today in a statement. “We should be outraged by her arrest, and Irby should not be prosecuted by the local State Attorney’s office."

We reached out to State Attorney Brian Hass' office for comment, and will update this post if and when he gets back to us.

In the last legislative session, Eskamani and Senator Lori Berman filed SB1206 and HB941 to keep guns away from people convicted of misdemeanor domestic violence offenses, and essentially close loopholes in Florida’s 2018 risk protection order law, which states that only a law enforcement officer or agency can file a petition for a risk protection order and remove firearms from a respondent who “poses a significant danger.”

Both bills died without a hearing.

“Federal gun laws already protect women from domestic abusers by prohibiting gun possession for people convicted of a 'misdemeanor crime of domestic violence' or subject to a final domestic violence restraining order,” said Eskamani. “But dangerous gaps and weaknesses in the system remain at the state level.”

The link between gun violence and domestic abuse is a well-known issue in the United States. According to the gun research nonprofit Everytown, roughly 4.5 million American women alive today have been threatened with a gun by an intimate partner, and 92% of all women killed with guns in high-income countries in 2015 were from the U.S.

According to a 2016 study from The Trace, a woman in the U.S. is shot and killed by a current or former intimate partner every 16 hours.

Eskamani says she and Berman plan to refile both bills in 2020.