DeSantis signs his first Florida budget, a record at $91 billion 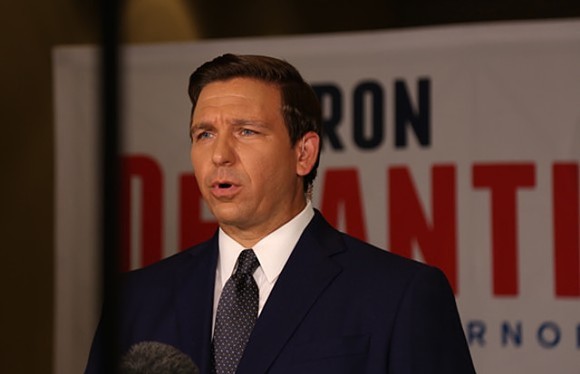 Gov. Ron DeSantis used his line-item veto power to slash more than $131 million in proposed spending Friday as he signed a record $90.98 billion budget for the fiscal year that begins July 1.

Calling the package “fiscally responsible,” the freshman governor praised lawmakers for exceeding his request for spending on environmental projects and for a boost in per-student funding in public schools.

“I think that we put taxpayers first, but I think the key issues that Floridians care about, things like the environment, things like education, things like transportation, we were there to really make a difference,” he said.

But DeSantis also acknowledged he took a light approach in the vetoes as lawmakers met many of his goals when they approved the budget (SB 2500) on May 4.

“I got more in the budget than most first-year governors,” DeSantis told reporters. “If I had not been as successful, there probably would have been more projects in there that I would have vetoed.”

When the Legislature approved what was a $91.1 billion budget last month, DeSantis vowed to get the number below $91 billion. He made it by a thin margin.

“We worked well together, so there wasn’t a need for me to exact any type of retribution because the Legislature didn’t work for me,” DeSantis said.

The signed budget is more than 2.5 percent larger than the $88.7 billion fiscal plan for the current year, which ends June 30.

“While we do not agree with every decision, it is clear that Gov. DeSantis takes his responsibility very seriously and that he has remained open-minded and approached the review process very deliberatively,” Galvano said in a statement. “In just a few short months we will return to Tallahassee to begin the process of crafting the budget for the 2020-2021 fiscal year, and we will have another opportunity to address the needs of our constituents.”

DeSantis has repeatedly praised lawmakers for funding for Everglades restoration and environmental projects. The governor requested $625 million, and the Legislature exceeded that amount by $55 million.

The budget directs nearly $10.2 billion in state general revenue to health and human services spending across five agencies. After adding other state and federal matching dollars, funding for Medicaid and mental health programs will total $37.6 billion in the coming fiscal year.

The Agency for Health Care Administration, which houses the Medicaid program, gobbles up 70 percent of the general-revenue dollars going to health and human services. When combined with federal matching funds, AHCA’s budget for the coming year is $29.4 billion.

In signing the budget, the governor approved $1.1 million to cover 25 positions to conduct concealed weapons permitting in the Department of Agriculture and Consumer Services and $250,000 to cover new litigation involving the Department of Education.

The litigation money comes as the DeSantis administration prepares to face legal challenges to education bills passed by the Legislature this year, including a bill that creates a new state-funded voucher program for students to attend private schools.

With the vetoes, the budget has a total of $5.4 billion in reserves. DeSantis said that is important for a state that has sustained heavy damage in hurricanes the past three years.

The budget, which was formally sent to DeSantis on June 14, included nearly 600 member projects worth a combined $400 million.

More than 160 projects were removed by DeSantis, who said he talked to lawmakers to give them a chance to explain their requests for funding.

Among the larger cuts were $8 million proposed a workforce housing project in Jacksonville; $4.57 million for a public-safety training center in Highlands County; and $1.69 million for a University of Central Florida downtown project.

“I graduated high school at Ruth Eckerd, they can do that, they have a foundation, the state does not need to do that,” DeSantis said.

In considering local projects, DeSantis said he wanted to see if there was a “real connection to an overall state policy.”

“There were in some instances,” he said. “We were very supportive of a lot of water projects throughout the state because I think that’s reinforcing my overall policy.”

But DeSantis said, for example, if he approved money to refurbish a local emergency operations center, which he considered “more of a county function,” the state might have to do the same for others.

A sticking point during the legislative session had to do with state funds being spent to build and renovate university and college buildings.

"We're building a lot of buildings and that's OK,” DeSantis said. “But I think that what is really going to take us to the next level is spending some of that money on more faculty, increasing salaries for people.”

The issue prompted reform in how state dollars could be used for construction projects, and DeSantis, for instance, vetoed a $2 million project for renovations of a University of North Florida hall.

Rep. Clay Yarborough, a Jacksonville Republican whose project to renovate UNF's Lassiter Hall was vetoed, said he appreciated the governor's "due diligence and consideration of each budget item."

DeSantis also nixed $1 million that was directed toward Doctors Memorial Hospital in Bonifay. The money would have been used to build a 6,000 square-foot facility to serve pediatric and cardiology specialists’ needs.