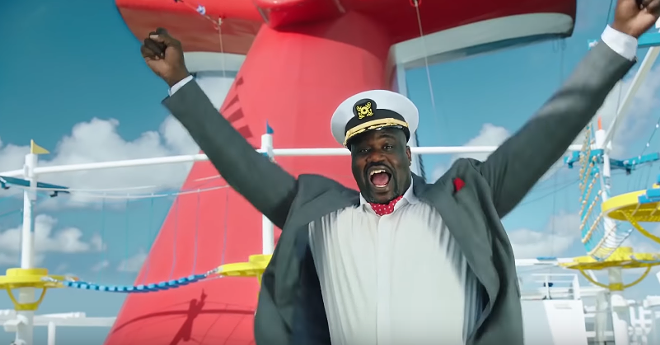 Mardi Gras, named after Carnival’s very first ship, will see many of Carnival’s onboard concepts reimagined. The typical pool bar has been replaced with the two-level, South Pacific-themed RedFrog Tiki Bar, where rum-based cocktails will be served in pineapples, Mai Tai glasses, and souvenir tiki glasses.

The Lido zone will also be home to one of the Guy Fieri restaurants, a New England themed seafood shack, a taco restaurant and a new food hall concept, Street Eats. The three kiosks in

Street Eats will feature a different menu each day. A fried station will offer items like empanadas or falafel, a steam kiosk will offer things like bao buns and siu mai, and a grill venue will offer items like kabobs and satay. Lido will also have unique infinity-edge Aft Tides Pool and will be home to one of the two Swirls soft-serve ice cream shops found on-board.

Mardi Gras’ second pool zone, Summer Landing, is home to the other Fieri restaurant. Like other recent Carnival ships, Mardi Gras will also have its own on-board brewery. A second craft beer and cocktail bar, The Watering Hole, will serve beers inspired by the ship’s ports of call, along with Carnival’s own beer line that is canned at Lakeland’s Brew Hub.

If the celebrity draw of Guy Fieri and Emeril Lagasse weren’t big enough, Carnival has partnered with an unexpected celebrity to bring yet another dining "experience" to its ships. Shaqille O’Neal raised eyebrows last year when he opened a fried chicken shack in Las Vegas, Big Chicken, but Shaq promises that his chicken sandwich, based on his mom’s recipe, is better than any other, including Chik-Fil-A, Wendy's or Raising Cane. In a new partnership with Shaq, Carnival will host Big Chicken outlets on multiple ships, including Mardi Gras and Radiance.

"Great food and beverage experiences are at the core of any vacation, especially at Carnival. We always strive to provide our guests with the most diverse options possible, but the sheer variety of food and beverage venues on board Mardi Gras is unlike anything we've ever offered before," says Christine Duffy, president of Carnival Cruise Line. "Our culinary and beverage teams continue to innovate, ensuring that we have an array of new and exciting options in addition to longtime Carnival favorites our guests love."

Shaq’s Big Chicken, Street Eats, and Swirls are included in all sailing packages. The Seafood Shack, RedFrog Tiki Bar, both of Fieri’s restaurants, and Lagasse’s dining options are available with an upcharge.

Beyond the food, Mardi Gras will offer guests plenty of excitement thanks to the first roller coaster at sea, a nightly comedy club, Family Feud Live and more.

Mardi Gras will enter service on Aug. 31, 2020, and after a short stint of European and New York voyages, it will call Port Canaveral its home port beginning in October 2020.